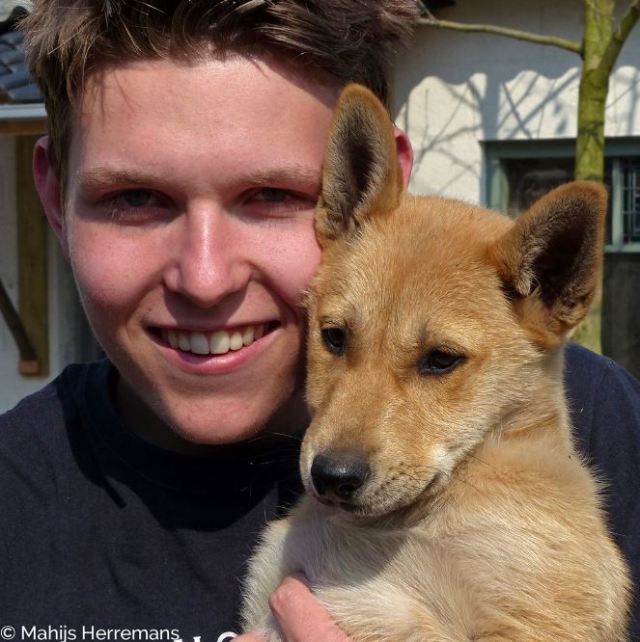 Mathijs and his dog, Azima

I’ve received a fascinating message from a relatively new beekeeper. The note was from a young man who is crowdsourcing funds to help pay for the translation and printing of an unusual beekeeping book.

Mathijs Herremans is a young Dutch beekeeper with nine colonies. Beekeeping has been a great experience for him. He tells us that his enthusiasm for bees has opened doors which his autism had kept closed in the past. It is often difficult for people with autism to participate in social activities, but Mathijs finds that he can talk about bees with strangers at honey markets and he enjoys interacting with the older beekeepers at his bee club.

The book which Mathijs is writing is based on a series of interviews with beekeepers in other parts of the world. He has met with beekeepers in the Netherlands and Spain and plans to go to Sicily in April. He has corresponded with beekeepers in other areas (including Cuba, Poland, Madagascar, Chile, Australia, and Pitcairn Island!). His contacts include commercial and organic as well as tree and skep beekeepers. He tells me, “I used to think there was only one way to keep bees, now I know there are so many!”

Mathijs does a lot of volunteer work for the beekeepers in his Association and is learning from the more experienced beekeepers. He is very ambitious this year – in addition to writing his book, he plans to learn queen breeding. Last year, he started keeping European dark honey bees found on Texel, a Dutch island.

Texel is a small, isolated, tourist destination with a few colonies of bees native to the island. Harsh varroa treatments of bees are avoided. Most beekeepers there rely on a system they call “Dreigangenmenu”, which sort of means three-course meal. This includes interrupted brood management, drone removal, and some soft organic-based chemicals. Mathijs tells us that the native dark bees have apparently built up some varroa resistance. Annual mortality rate is less than nine percent.  Mathijs (among others, of course) is considering ways that other isolated Dutch islands might be used to breed native European varroa-resistant bees.

Here is a link to his crowdfunding page. Mathijs would like to reach €5000. Any amount will get him closer to his goal. The book will be printed in Dutch, then if funds allow, he’ll follow with an English translation. Today, using my pseudo-anonymous Dutch pen name (“Gast“) I donated €10 to the project. I hope that you can spare a few dollars, too. The fundraiser page is in Dutch – don’t let that scare you. Donations speak the international language of the Visa card.

Ron Miksha is a bee ecologist working at the University of Calgary. He is also a geophysicist and does a bit of science writing and blogging. Ron has worked as a radio broadcaster, a beekeeper, and Earth scientist. (Ask him about seismic waves.) He's based in Calgary, Alberta, Canada.
View all posts by Ron Miksha →
This entry was posted in Beekeeping, Books, Outreach and tagged crowd-funding, dark bees, Dutch, varroa mites. Bookmark the permalink.

2 Responses to Support a Book