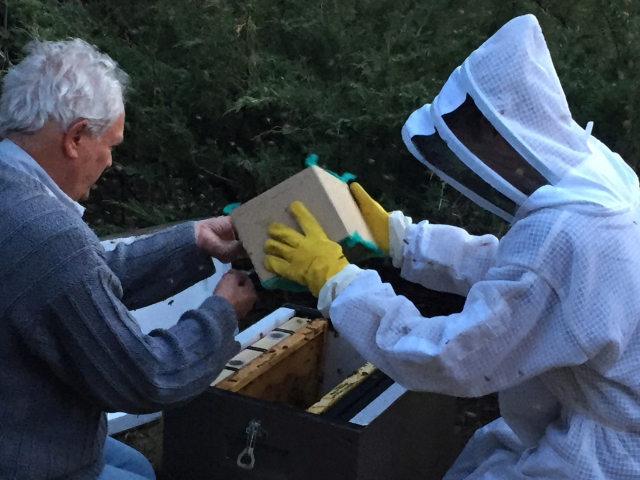 Three weeks ago, we installed two packages in our backyard.  We started with mostly new equipment, though we had six drawn, white-comb, deep frames for the bees to nest in right away. I considered using 100% foundation and letting the bees draw entirely new everything but then I considered that the little bugs deserved a small luxury after flying Air New Zealand for twenty hours. Imagine bees in flight without actually flying.

Our New Zealand packages were installed in Canada just before sunset on a Friday evening. (I described that in an earlier blog post.) Their new homes had four litres (a ‘gallon’) of sugar water, drawn combs and some foundation. I did a quick-release of the queens, opening their little cages so the queens could walk out and join their subjects. Smart beekeepers give freshly-planted packages a full week to settle before ripping the hive’s guts open, but I don’t pass as smart. I fretted that the queens might be stuck in their cages instead of monarching around on the combs, laying eggs. Worse, what if the bees are starving – unable to reach the feeders because of cool weather. So, on Day 4, I looked. 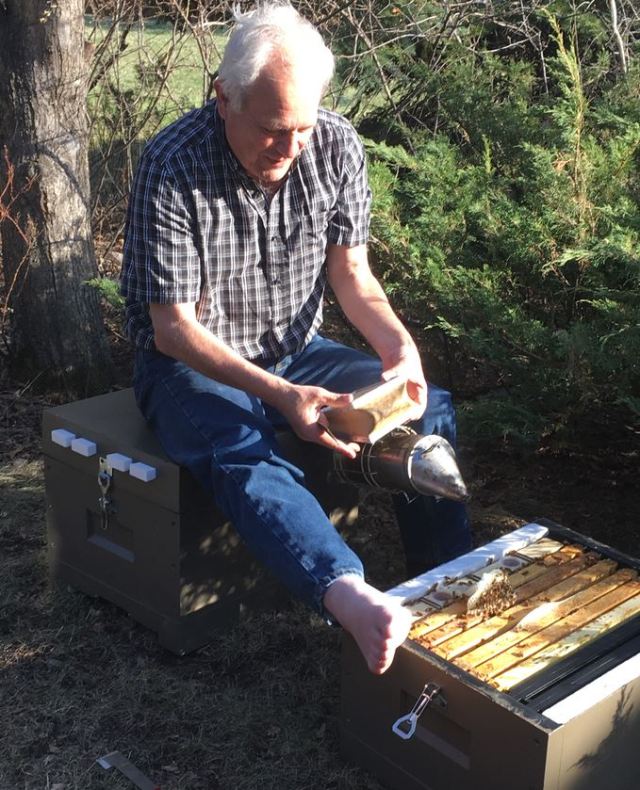 Day 4: It’s not recommended to check a package until a week has passed.
But if you do, be quick, quiet, and barefooted.

Day 4: Pointing at stored pollen. Sorry, you can’t see it from your perspective.
It’s really just one single cell with some pollen.

Day 4: The darker area, center of the comb, has eggs but no larvae.

Eggs! In both hives!  Now that’s something to report to the local radio’s noon-time farm report. The queens were laying eggs! The workers were gathering a bit of pollen.

Our Day 4 glance confirmed that the queens were alive and laying eggs and the bees were accessing feed. The bees had eaten about two pounds of sugar in their first four days. We added more syrup, then closed the hives.

We let the bees bee for a few more days, but then curiosity got me again. We opened the hives on Day 8 and here’s what we saw.  Big juicy larvae! 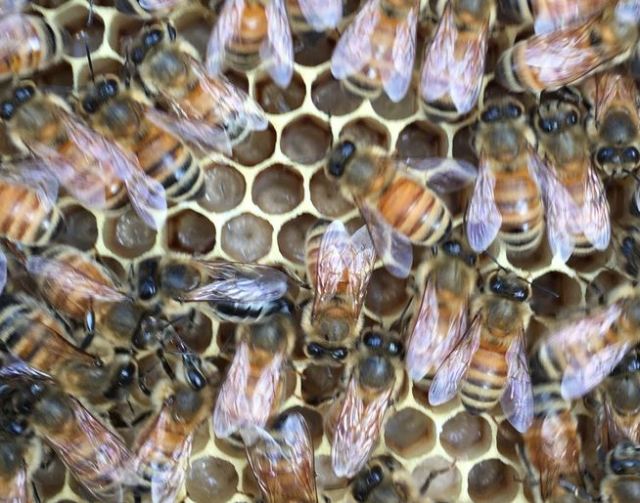 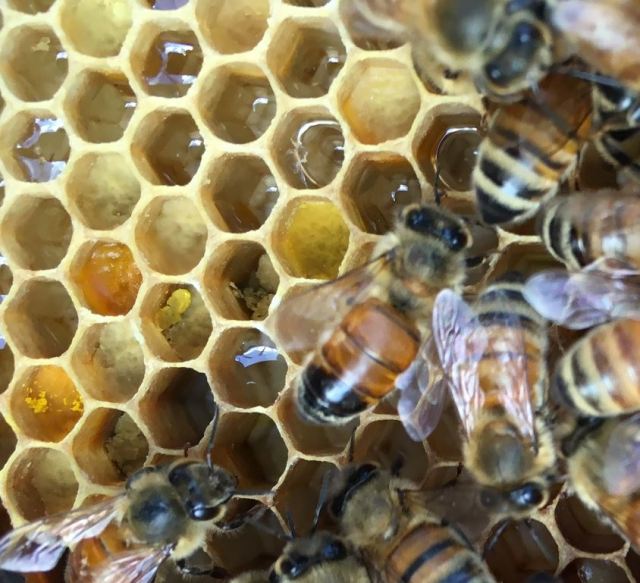 Day 8: Suddenly, there is a surprising amount of stored pollen. On Day 4, there was almost none. Now that there are hundreds of hungry larvae (and the weather’s been mild for a few days), we see lots of pollen. I think it’s from crocus and willow flowers. Dandelions haven’t opened yet. You can see unpacked pollen pellets.

On Day 11, we saw sealed brood. Bees normally cap worker brood on the ninth, so this was on schedule, considering the queen likely started laying a day or so after release.

Day 11 for the package. Some sealed brood.

Day 11: The amount of stored pollen in the hives was amazing. In eleven days, the packages have added all this wealth to their colony – gorgeous pollen, even some sealed honey. This is as close to magic as anything I know.

We checked the bees again on Day 17. I reminded myself that every adult bee in the hives was born in New Zealand. I would guess that about one-third of the original 6,000 bees in each colony have died, from old age, by now. So, we are down to 4,000 bees, more or less. But I’ve seen both queens and they look good and are laying eggs nicely.

Bees are dying their natural death as they age, but the queens are young and should be with us a long time. I hope you can spot the queen in this picture.

The brood nests have continued to expand and the amount of sealed brood has grown a lot. I’d guess that each hive has almost two frames of sealed brood and two frames of younger brood. Deep frames hold 8,000 cells. On Day 17, it looks like brood covers over two-thirds of three frames or four frames. That means at least 16,000 workers are waiting to emerge. Considering that each hive has just 4,000 bees right now, the populations will spike upwards in the next three weeks, actually increasing four times!   (By the way, I’d also guess that the queens have been laying eggs for 16 days – that’s 1,000 eggs each day. You’ve probably heard that queens can lay over 2,000 a day. These queens have been less prolific because their colony size is small, weather was cool, and the pollen flow was light until now.)  Here’s what the inside of a hive should look like, 17 days after installing a package.

Day 17. Almost four frames of brood, each about two-thirds full.
I’d guess that there are about 16,000 brood developing. 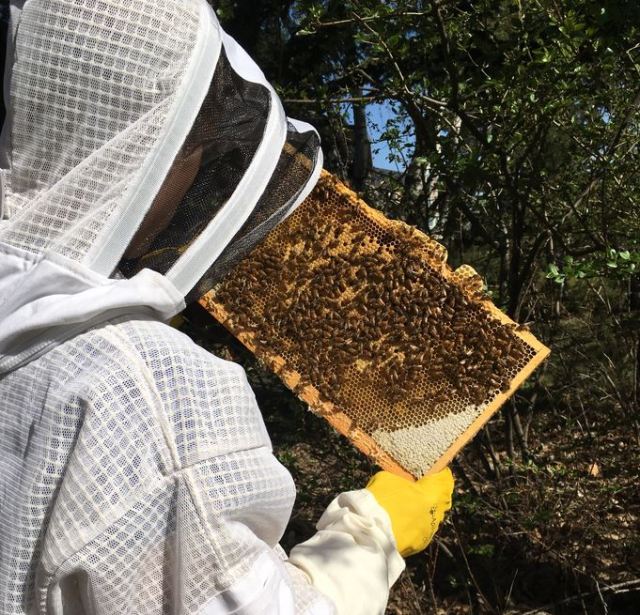 Day 21. Well, three weeks have passed. If the queens started laying eggs a day or so after the installation, the first of them might be adult worker bees emerging tomorrow. The past few days have been cool (10C, 50F) and rainy. Today is warmer and there’s some sunshine, but we won’t bother the bees until tomorrow or Sunday. If you can avoid bothering bees when it’s rainy or on the day after rain, you’ll find that they are less defensive. So we’ll wait one more day. By tomorrow, we’ll likely see a few new bees – our first Canadian-born youngsters in hives populated by immigrants. 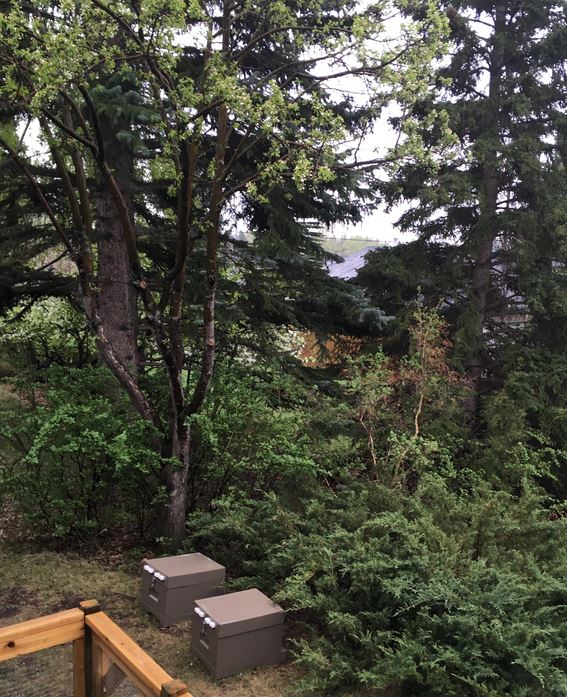 Day 21.  It has been a bit cool and rainy the past few days. We’ll let the bees rest until we get some warmer weather, then we’ll check to see if the first new youngsters are emerging from their cells.

Ron Miksha is a bee ecologist working at the University of Calgary. He is also a geophysicist and does a bit of science writing and blogging. Ron has worked as a radio broadcaster, a beekeeper, and Earth scientist. (Ask him about seismic waves.) He's based in Calgary, Alberta, Canada.
View all posts by Ron Miksha →
This entry was posted in Bee Biology, Beekeeping and tagged Calgary, urban beekeeping. Bookmark the permalink.