I have a type of motor neuron disease, similar to amyotrophic lateral sclerosis, which most people call ALS or Lou Gehrig’s Disease because that’s easier to say. Every year I do a post about the disease in order to thank, in a small way, the people who participate in annual runs/walks/rolls and other fundraisers held around the world.  Things like The Ice Bucket Challenge have been phenomenal in raising money ($115 million) and awareness – a lot of good stuff has come out of that bucket.

Getting Soaked:  My wife and I accepted the challenge. This was back in 2014.
It looks like my son is enjoying this a bit too much.

After: We were OK.

I was diagnosed with motor neuron disease 20 years ago.  Lucky for me, my motor neuron disorder is atypical ALS, which means it’s not the typical fast-paced disease. Instead, mine has a much slower progression. Normally, ALS paralyzes within two or three years. All motion – walking, talking, breathing, everything – stops. Unless the afflicted chooses a respirator, feeding tube, and constant nursing care, the patient dies. However, the brain is unaffected.

Using assists like ventilators and aides is how Stephen Hawking survived to 76 – a respectable age for any man, but incredible for someone living with the ALS diagnoses for 50 years. His ALS started early and progressed slowly, but he had equipment and full-time nursing help.

When Stephen Hawking was diagnosed in his 20s with ALS, his doctors gave him a grim prognosis – they figured he wouldn’t see 30. Hawking said that he was devastated but decided to work on his PhD anyway. And get married. And have kids. And travel. And write. And, of course, he figured out a few things about the universe. Professor Hawking died earlier this year. We might not understand all of his maths and physics, but Stephen Hawking gave us all a lesson in perseverance and tenacity. I think that was his greatest gift. 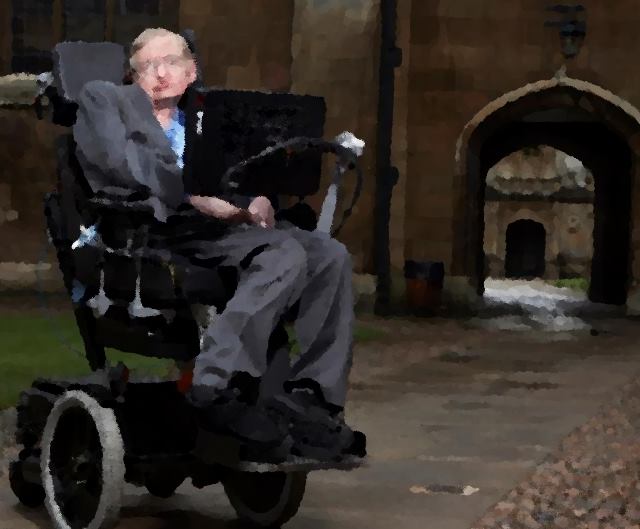 No one knows why my form of motor neuron disease is so unusually slow. Mine started at age 44 so I’ve been living with my variant of motor neuron disorder for 20 years. Mine is progressive – I can’t walk much any more and my arms and hands are weaker every year, but that’s not too bad after such a long time. It will continue to get worse, but if the progression remains slow, I’ll be blogging for many years to come.

A friend asked me if all those thousands of bee stings I’d had over the years made the difference, but other beekeepers I’ve known (commercial beeman Ernie Fuhr from the Peace River country, up near the Yukon; and, Bill Turner from our own Calgary Bee Club) were both killed by this disease. Recently, a group looking at alternative treatments for ALS reviewed bee venom and found that it was unlikely to be helpful.

The discovery of a cure for ALS and the funding of equipment (motorized wheelchairs, ramps, beds, vans, ventilators) takes a bit of money. The Ice Challenge and all those fundraising programs contributed a lot. If you’d like to help, please give a few dollars to Margot and her family’s fundraiser. Margot, a geophysicist, has been a friend of mine since our days at the University of Saskatchewan. Here’s a link to the site where you may contribute ten or twenty dollars, if you like.

Calgary’s biggest ALS Alberta fundraiser is called “Betty’s Run”.  One of the corporate sponsors is a company called Pure Sweet Honey Farm, owned by my friends Stan and Willy. They have been supporting Betty’s Run for years. We owe a huge, huge thank you to these people. I met Stan and Willy when they kept bees in Florida and my hives were near theirs. We lived in the same cheap, rundown rental trailer park and we all owned our respective 20-year-old flatbed trucks. Business partners Stan and Willy went on to found the honey packing company, Pure Sweet Honey, and I disappeared to Canada, but we’ve been in touch ever since.  As Gold sponsors of Betty’s Run, their name and logo appears on signs and two thousand or so runner’s shirts  each year – a good reminder to participants to fuel up on honey for the run!  You can see the logo, left, and below, my kids are modelling this year’s shirts.

Betty’s Run for ALS (actually, Betty’s Run against ALS) was held today, Sunday, June 10th. Not long after 58-year-old Betty Norman died of ALS in 1997, some of her friends decided to honour her memory and raise awareness and funds to fight the disease. This year about 1,500 people participated as walkers and runners. They raised $400,000 for ALS research and to help the organization that provides support (vans, motorized wheelchairs, home care equipment) and outreach programs. During the 22 years of Betty’s Runs, nearly eight million dollars were raised here in Calgary.

The walk/run/roll has become a social event with friends meeting and chatting. I was happy to have had my wife (who was an organizing volunteer for the local ALS society) and my four kids and three grandchildren on past walks. For the smallest kids, the bouncy castle was the main draw. For us older kids, walking 5 kilometres (or being pushed in a chair) gives an opportunity to think about people and the illness. Most participants wore tags that said things like “I’m Here for My Wife” or “I’m Here for Jim”. My tag said “I’m Here for Everyone” as a reminder that everyone is affected, directly or indirectly by this illness.

Ron Miksha is a bee ecologist working at the University of Calgary. He is also a geophysicist and does a bit of science writing and blogging. Ron has worked as a radio broadcaster, a beekeeper, and Earth scientist. (Ask him about seismic waves.) He's based in Calgary, Alberta, Canada.
View all posts by Ron Miksha →
This entry was posted in Apitherapy, Culture, or lack thereof, Friends, Outreach and tagged ALS, bee stings, Betty's Run, Calgary, Pure Sweet Honey Farm. Bookmark the permalink.