I ran this piece last year, but it’s worth repeating. After the natural spring bouquet has begun to fade, honey bees may become hungry. The hives are (usually) strong with lots of brood. If there is a long gap between the last spring flowers and the first summer ones, bees are at risk of cannibalizing their brood (Yummy!) and then starving to death. Neither is desirable. I guess you know that.  This week might be the most critical week for a lot of readers, so here’s my gap post.

If you travel metro in London (and many other cities) you might hear a polite admonition from the public address system, “Mind the gap!” It’s advising you not to get your footwear stuck between the train and platform while boarding. Beekeepers have their own gap to mind and it’s here now.

The June Gap is pretty common across the northern hemisphere. (Perhaps there’s a December Gap down in Chile.) The gap is so renowned among beekeepers that someone built a wikipage called “June Gap”. It relates mostly to the UK, but we also gap here, in western Canada, too. This is what the wiki says:

The June Gap refers to a phenomenon in which a shortage of forage available for bees occurs (typically in June) and has been observed in the United Kingdom and Ireland.

Subsequent to the massive volume of pollen and nectar produced by trees and hedges in the spring, there is a reduction in the amount of nectar available to the bees due to long grasses and dandelions suppressing many wildflowers.[1] Before the herbaceous “summer rush” of July-through-September which reinstates the high level of nectar, the high hive populations brought around by trees in the spring struggle to produce honey and may lay fewer eggs. Beekeepers need to pay special attention to the levels of honey in the hive as well as the level of water the bees use during this gap. Annual weather patterns can cause this event to occur later or earlier.

Some plants which can help provide nectar in this gap are Cotoneaster, the closely related Pyracantha, common garden [herbs], and perennial garden plants.

That’s all the Wikipedia entry says, then a few references are cited. The June Gap isn’t limited to England and Ireland. We also gapped in western Pennsylvania, where I learned to keep bees. In April and May, we saw a nice early flow from willow, dandelion, and fruit blossom. Most years, black locust (Robinia pseudoacacia) straddled late May and early June followed by tulip poplar (Liriodendron tulipifera) and basswood (linden, or Tilia americana). Then there was a (summer) gap until the autumn goldenrod and aster. Farther north and west, most beekeepers on the American plains and Canadian prairies suffer a real June Gap, a dearth between spring flows and our main summer honey flow. 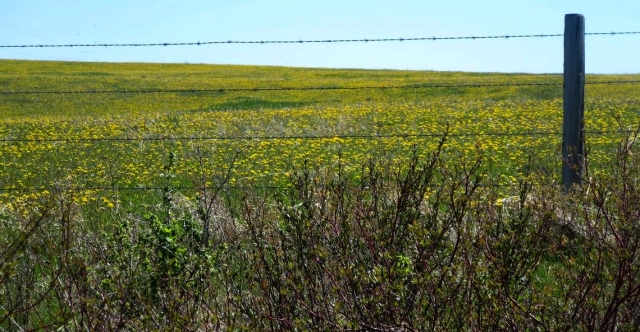 A great pasture for bees: dandelions, before the gap

What happens during the gap? There is often a little pollen coming in, but rarely is there much nectar. For those of us lucky enough to live in Alberta, Canada, we may have a good flow from dandelion (this year it peaked on May 25th, which is normal) but the drop after that major source is precipitous. We have sparse flowers (goat’s beard, buffaloberry, Siberian olive, caragana) which tease the bees a bit, but we can see hives lose weight, even on sunny mild June days. Most years, we have gaps (of varying significance) from about June 5th to June 25th. During those three weeks, queens curtail egg laying. Crucial workers that will help make the late July and August part of the honey crop might not materialize in the numbers you need.

Beekeepers have taken to feeding their bees up to a few days before honey supers go on. If the dearth is severe and hives have built up strongly on the early season flows, the gap will result in less brood rearing. But the gap can be so serious that bees destroy their developing brood and then, if it continues, they may starve. It’s possible to lose hives from starvation days before the main flow starts. Leaving plenty of reserve honey in the hive will, of course, prevent such a fate. But even a well-provisioned colony usually stops egg laying when the nectar shuts off and pollen becomes scarce.

The solution? Mind the gap. Keep a couple of eyes on your hives at this time of the year. The crop (for most of us) will start flowing in a few days. This is not the time to ignore your bees.

Ron Miksha is a bee ecologist working at the University of Calgary. He is also a geophysicist and does a bit of science writing and blogging. Ron has worked as a radio broadcaster, a beekeeper, and Earth scientist. (Ask him about seismic waves.) He's based in Calgary, Alberta, Canada. Ron has written two books, dozens of magazine and journal articles, and complements his first book, Bad Beekeeping, with the blog at badbeekeepingblog.com. Ron wrote his most recent book, The Mountain Mystery, for everyone who has looked at a mountain and wondered what miracles of nature set it upon the landscape. For more about Ron, including some cool pictures taken when he was a teenager, please check Ron's site: miksha.com.
View all posts by Ron Miksha →
This entry was posted in Beekeeping, Ecology, Honey Plants and tagged Alberta, dandelions, feeding bees, June beekeeping, Pennsylvania. Bookmark the permalink.

2 Responses to Minding the June Gap