Apitherapy, which means using bee stuff for health, can include eating pollen, propolis, wax, royal jelly, bee larvae, and honey – or rubbing them on your face. But for many, apitherapy is bee sting therapy. Stings are sometimes promoted as a treatment for autoimmune disorders, like MS and rheumatism. Less frequently (but with more notice), bee venom is an ingredient in skin creams  – as you can read here. (And here, here, and here.) However, a recent death due to a bee sting administered as apitherapy is newsworthy.

I don’t want to deflate the World Apitherapy Day balloon, but if you’re not careful, bee sting therapy can be fatal therapy. Most long-time beekeepers have been stung thousands of times. (That’s not an exaggeration.) We may forget that, for some people, a bee sting can be much worse than a bit of swelling, redness, and pain. A single bee sting can kill. Although bee sting therapy may work wonders on some auto-immune syndromes, stings might send a patient into systemic shock. That’s what reportedly happened in Spain.

A 55-year-old woman was undergoing bee sting therapy to treat stress and muscle fatigue. Her fatal sting was not her first bee sting – she had reportedly been getting sting therapy monthly for two years. Her fate is really unusual. If a severe reaction occurs, it is usually within the first few treatments. Sadly, although she had at least 20 previous sting sessions over many months without incident, the woman suddenly developed a “loss of consciousness immediately after a live bee sting,” according to the Journal of Investigational Allergology and Clinical Immunology:

During an apitherapy session, she developed wheezing, dyspnea, and sudden loss of consciousness immediately after a live bee sting. An ambulance was called, although it took 30 minutes to arrive. The apitherapy clinic personnel administered methylprednisolone. No adrenaline was available. When the ambulance arrived, the patient’s systolic pressure had dropped to 42 mmHg and her heart rate had increased to 110 bpm.

The woman never regained consciousness and later died from organ failure at hospital. Such bee-therapy fatalities are rare. Only one other treatment is known to have ended a life. However, a meta-analysis of several hundred studies showed that a significant number of therapies have caused serious reactions. The figure given in the analysis (Risk Associated with Bee Venom Therapy: A Systematic Review and Meta-Analysis) indicated that 12% of people undergoing bee venom therapy from live stings (as opposed to physician-administered controlled injections of bee venom) experience serious reactions.

In two of the courses which I help teach – Making Money from Honey and Beginner’s Beekeeping, We always show a slide about bee sting therapy. For the beginners’ group, I mention it because many new beekeepers know the health benefits of a jab of bee venom, as seen on YouTube. We try to be sure that they understand the risks involved. For more advanced beekeepers, I mention bee sting therapy as something they may have considered as a source of income (and a way to help people). In both courses, I strongly advise against stinging anyone. Intentionally inflicting bee venom so that a client may gain health benefits might be considered “practising medicine without a license.” And you could kill someone.

I don’t want this blog posting to be an anti-apitherapy diatribe. I think that there is a lot of evidence that bee sting therapy can help some people some of the time. I’ve met people who claim that they are alive and active today because of bee stings. But I still refuse to get involved in administering the treatments myself – I’m not a trained first-responder. If something goes very badly wrong, the patient needs to be in the hands of someone with proper emergency experience. 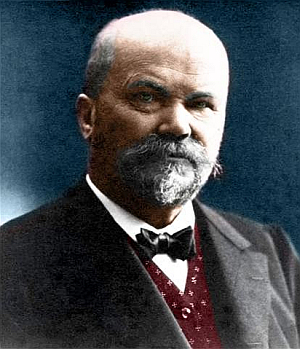 That’s my soap box speech for apitherapy caveats. You may wonder why March 30 is World Apitherapy Day. Today is not only my birthday, but it’s also the birthdate of the most important early promoter of healthy bee stings, Filip Terč, whom you see glaring at you adjacent to this sentence. Terč practiced medicine in Maribor, Slovenia, over a hundred years ago. As a young man, he suffered badly from rheumatoid pain until, at age 22, he was accidentally stung by an defensive mob of irritated honey bees. It changed his life. His pain was gone.

Terč began a serious study of the effects of bee venom therapy. He published the first clinical trials of the therapeutic effects of bee stings in the 1888 publication “Report on the Peculiar Connection between Bee Stings and Rheumatism”. He presented the results of treating 680 patients with the collective application of 39,000 stings. (An average of 60 stings/patient, administered over several months.)  He claimed that 82% experienced a complete cure, 15% had partial recovery, and just 3% had no relief from their rheumatoid condition. Although his work was published over a hundred years ago and his results have not been disputed, the medical profession is still cautious about the link between rheumatism, auto-immune dysfunctions, and some of the elements of bee venom. With immune disorders ranging from multiple sclerosis to allergies on the rise, the use of apitherapy treatments are finally becoming more accepted and generally more widely available. So, with cautious caveats, celebrate World Apitherapy Day. (And send regards to all those beekeepers with birthdays today).

Ron Miksha is a bee ecologist working at the University of Calgary. He is also a geophysicist and does a bit of science writing and blogging. Ron has worked as a radio broadcaster, a beekeeper, and Earth scientist. (Ask him about seismic waves.) He's based in Calgary, Alberta, Canada. Ron has written two books, dozens of magazine and journal articles, and complements his first book, Bad Beekeeping, with the blog at badbeekeepingblog.com. Ron wrote his most recent book, The Mountain Mystery, for everyone who has looked at a mountain and wondered what miracles of nature set it upon the landscape. For more about Ron, including some cool pictures taken when he was a teenager, please check Ron's site: miksha.com.
View all posts by Ron Miksha →
This entry was posted in Apitherapy, Culture, or lack thereof, Outreach, People, Stings, Uncategorized and tagged anaphylactic shock, Apitherapy, Apitherapy Day, bee stings, Filip Terč, rheumatism. Bookmark the permalink.