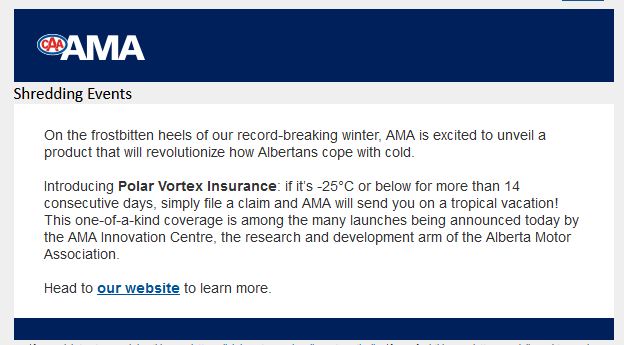 Our local Auto Club (Alberta Motor Association) is offering Polar Vortex Insurance. This is a great new feature (for members only) – if the temperature stays at -25C, or colder, for any 14 consecutive days, each paid-up member gets to file a claim with the insurance company and collect a 14-day tropical holiday.

I have heard that they are considering a special insurance clause to also replace any dead overwintered honey bee colonies at the same time (for members only). They will replace them with tropical bees, as long as a ‘clean health’ certificate shows that there was never any nosema, dysentery, starvation, viruses, varroa mites, chalk, European, or American foul brood present at any time in the past.

This special offer from AMA Insurance was announced today, April first. Once again, our motor club is a trend-setting organization. Nice work, folks!  Read the details here – it’s worth your time.

Ron Miksha is a bee ecologist working at the University of Calgary. He is also a geophysicist and does a bit of science writing and blogging. Ron has worked as a radio broadcaster, a beekeeper, and Earth scientist. (Ask him about seismic waves.) He's based in Calgary, Alberta, Canada. Ron has written two books, dozens of magazine and journal articles, and complements his first book, Bad Beekeeping, with the blog at badbeekeepingblog.com. Ron wrote his most recent book, The Mountain Mystery, for everyone who has looked at a mountain and wondered what miracles of nature set it upon the landscape. For more about Ron, including some cool pictures taken when he was a teenager, please check Ron's site: miksha.com.
View all posts by Ron Miksha →
This entry was posted in Climate, Humour, Save the Bees, Strange, Odd Stuff and tagged Alberta, cold weather, insurance, wintering bees. Bookmark the permalink.