The reason we don’t raise April queens in Alberta 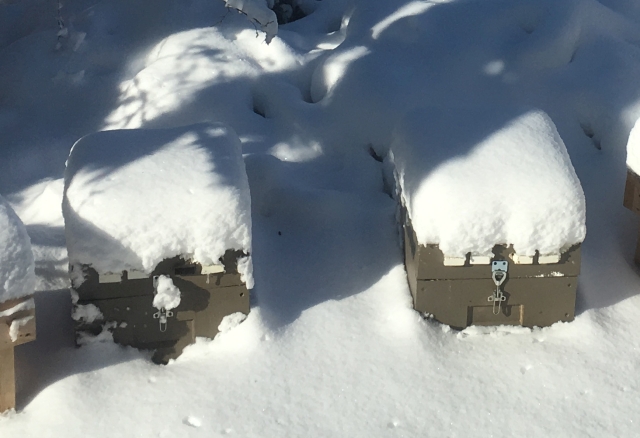 It snowed again. After weeks of sweet weather, balmy enough for T-shirts, the bees quit hauling pollen and focused on hibernation.  This is the reason so few queens are bred in Canada.  We can do it, but freaky weather gets in the way. Someday, I’m sure, there will be a big dome over my hometown of Calgary. Inside, there will be banana bushes and fig vines. Somewhere in our dome, a Drone Congregation Area will develop and our young queens will find their way to it.  Meanwhile, we are dealing with fresh snow and chilly temperatures. I’m glad that we weren’t expecting mating weather.

Coincidental to the April 28 blizzard, a few hundred honey bee packages arrived in Calgary from New Zealand. A large group of bees went to our neighbours at Tsuut’ina Nation, the rest (over 200 packages) are going to some of Calgary’s 400 active beekeepers, via the Calgary and District Beekeepers’ Association.  Regardless the snowstorm we had overnight, packages being installed now will do just fine.  In a few days, pollen will be flowing and all the snowflakes will melt into water for future flowers’ nectar.

Ron Miksha is a bee ecologist working at the University of Calgary. He is also a geophysicist and does a bit of science writing and blogging. Ron has worked as a radio broadcaster, a beekeeper, and Earth scientist. (Ask him about seismic waves.) He's based in Calgary, Alberta, Canada. Ron has written two books, dozens of magazine and journal articles, and complements his first book, Bad Beekeeping, with the blog at badbeekeepingblog.com. Ron wrote his most recent book, The Mountain Mystery, for everyone who has looked at a mountain and wondered what miracles of nature set it upon the landscape. For more about Ron, including some cool pictures taken when he was a teenager, please check Ron's site: miksha.com.
View all posts by Ron Miksha →
This entry was posted in Beekeeping, Climate and tagged Alberta, Calgary, Spring, urban beekeeping, wintering bees. Bookmark the permalink.