Icelandic bumble bees, seen on my 2018 trip to the ice island. Chilled by a cold rainy summer, they are just waking up as the clouds began to unveil the sun. (Photo: Jane Miksha)

In the past three or four years, I began to notice that honey bees aren’t the only bees in the world. What a surprise! There are over 20,000 other versions. Some as big as elephants, some as small as pin heads.  Perhaps I exaggerate a little, but the range in shape, colour, and size of bees is impressive.

I’m still a western honey bee enthusiast, enamoured by their manners and their advance form of civilization. I still want to be buried in a beehive when I die. But I’ve been researching bee ecology at the University of Calgary and have become more and more fond of the other species.  Pollinator Week, which begins today, June 17, reminds us all to notice the other pollinators – including some ants, butterflies, bats, birds, and several hundred other creatures. 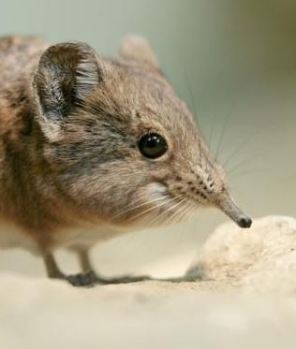 The elephant shrew, practicing on sugar before moving on to nectar.

Among the more unusual/ignored pollinators are bats, toads, and mongooses (mongeese?). The BBC has a fun page that talks about mongoslings which transport pollen while snacking on nectar (to wash the taste of cobra from their mouths, I suppose). BBC also mentions the elephant shrew which uses its elephant nose to probe flowers for pollen and nectar, spreading goodies from blossom to blossom. (Incidentally, this mouse-sized creature is genetically closer to elephants than shrews – as you can see from its face.)

In China, some farmers carry little brushes into orchards, dusting pollen on pear and apple blossoms. In areas bordering Tibet, apple crops must be hand-pollinated by humans. These are areas so remote and rugged that it’s not possible to haul in native eastern honey bees (or any other non-human pollinators). Although wind and gravity may do some apple pollination work, Wired magazine credits local farmers with doing “100% of the pollination” – depending on variety and need for cross-pollination, that might be true. Both Wired (Will We Still have Fruit if Bees Die Off?) and Huffington Post (Startling Effect of Shrinking Bee Populations) claim that the impending extinction of bees has caused humans to hand pollinate. They are wrong. Read their articles and see for yourself.

Pollinator Week has a wide variety of pollinators to celebrate: Birds, bats, toads, butterflies, shrews, humans, gravity, and wind. We, of course, want to give due credit to bees. After all, they help pollinate our gluten-free favourites: squash and blueberries. (Not to mention apples, almonds, rambutan, mangos, kidney beans, canola, and kiwis. And a few dozen more.)

Yesterday, a friend asked me what she could do to encourage pollination in her garden. I fumbled for an answer. Do you buy a hive of bees, bring in leaf cutters, masons, bumble bees, or elephant shrews? Or do you plant flowers that will attract bees, shrews, and maybe humans to your backyard? If it’s bees you are after, you might like to look at this website: http://www.pollinator.org/guides. You’ll find excellent (really excellent) guidebooks that will help you decide what to plant to attract bees and butterflies to your own garden. Though, alas, no mention of attracting shrews, mongooses, or humans. You’re on your own with those.

Ron Miksha is a bee ecologist working at the University of Calgary. He is also a geophysicist and does a bit of science writing and blogging. Ron has worked as a radio broadcaster, a beekeeper, and Earth scientist. (Ask him about seismic waves.) He's based in Calgary, Alberta, Canada. Ron has written two books, dozens of magazine and journal articles, and complements his first book, Bad Beekeeping, with the blog at badbeekeepingblog.com. Ron wrote his most recent book, The Mountain Mystery, for everyone who has looked at a mountain and wondered what miracles of nature set it upon the landscape. For more about Ron, including some cool pictures taken when he was a teenager, please check Ron's site: miksha.com.
View all posts by Ron Miksha →
This entry was posted in Culture, or lack thereof, Ecology, Outreach, Pollination and tagged bumblebees, National Pollination Week, Pollination, pollinators. Bookmark the permalink.