Fifty years ago, I was a kid, glued to the TV, fascinated by man’s first frolic on the moon. Grainy black and white images from the moon filled our grainy black and white television. It was a signal from the space, beamed to NASA’s earth-bound receivers, relayed to KDKA in Pittsburgh, then sent as an analog wave of organized static to the antennae on a 15-foot post clamped to the side of our rural farmhouse on the edge of the Appalachians. As a geeky youngster with thick glasses, I misunderstood the moon mission’s purpose.  I thought it was all about science and exploration. Soon, a moon  base would be built, then the flight to Mars, then Alpha Centauri, where I’d meet English-speaking aliens with huge heads and tiny bodies. That’s the way it was supposed to go.

But three years later, the moon flights ended. We haven’t ventured back. What went wrong? Nothing. Now I realize that my expectations were mistaken. The American space effort, “landing a man on the Moon and returning him safely to the Earth,” as President Kennedy said, was the real goal. Not science. The moon mission proved to the world (and Russia), that no one messes with the USA. Americans could set a goal, commit billions of dollars, muster huge technological expertise, and see an enormous task through to completion. Mission accomplished. A few more rock-picking excursions followed, but there was no political reason to return. 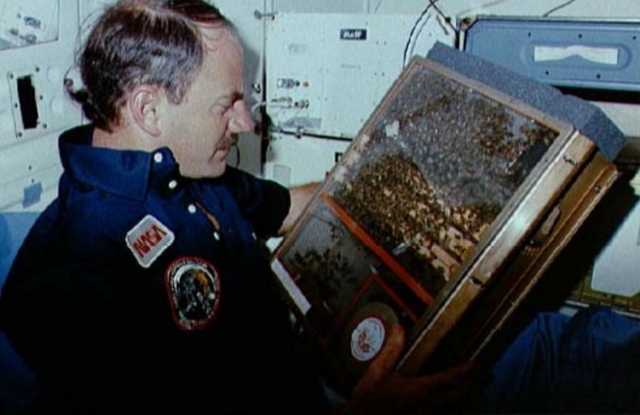 Bees in space, examined by James van Hoften, crewman on the Challenger. 1984: NASA.

Scientists at NASA always understood that science was a lunar tag-along. To foster public interest in space exploration (and to help their plea for future flight funding),  several down-to-earth experiments were widely publicized. High schools were invited to propose science investigations. One proposal led to bees in space.

In 1984, over ten years after the last moon walk, an experiment suggested by Waverly, Tennessee, high school student Daniel Poskevich, was carried aboard the Challenger Space Shuttle. His experiment included 3,400 honey bees in a glass-windowed aluminum observation hive. A similar hive was kept on Earth as a control. What would space bees do?

In their log book, the crew recorded: “Day 7, comb well-developed, bees seemed to adapt to 0-g pretty well. No longer trying to fly against top of box. Many actually fly from place to place” within their observation hive.  During the mission, worker bees produced a mere 30-square-inch comb (in the same hex-pattern as ordinary Earth-comb) and the queen laid just 35 eggs in the new comb.  None of those eggs hatched.

And? Well, if a space-queen’s eggs don’t hatch, this doesn’t bode well for the future of weightless honey production. I guess this is good to know before some California beekeeper ships a semi-load of bees upwards. Flowers might be an issue, too, though I’ll bet real crypto-currency that someday, in a greenhouse on Mars, tomatoes will be pollinated by bumble bees. And they will flourish.

I know. These are Martian potatoes. They don’t need bees. But the concept is the same.

Ron Miksha is a bee ecologist working at the University of Calgary. He is also a geophysicist and does a bit of science writing and blogging. Ron has worked as a radio broadcaster, a beekeeper, and Earth scientist. (Ask him about seismic waves.) He's based in Calgary, Alberta, Canada.
View all posts by Ron Miksha →
This entry was posted in History, Queens, Science, Strange, Odd Stuff and tagged exploration, moon, space. Bookmark the permalink.

2 Responses to Bees in Space