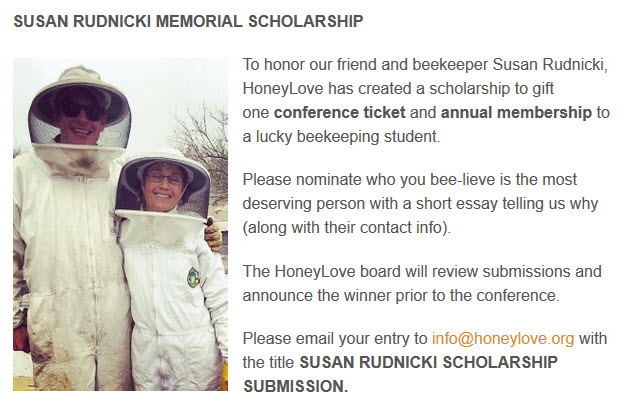 I never met Susan Rudnicki, but we sparred regularly right here on this blog. She was passionate about her California Africanized bees, about young women’s education (especially in developing countries), and about the need for us to take care of this planet. Our disagreements were minor, engaging, and illuminating. I felt like we were friends, pen pals of a sort, though our correspondence was public, shared on the web.

This went on for a while and Susan became one of the most regular members of the comment gallery. Then, almost exactly one year ago, she sent me a private note, telling me that she was sick. She had pancreatic cancer. A tiny proportion of people with this diagnosis live for years. I was sure that she would be one and encouraged her natural optimism. She was thin, active, strong, and maintained a healthy diet. She was unlikely to be inflicted with the disease in the first place, and she was likely to enjoy many more years of advocacy and fussing over her bees. But within months, she died.  If you’d like to know more about this amazing person, you can visit this blog post.

Next weekend, January 18 and 19, the HoneyLove organization is holding a Natural Beekeeping Conference at LA’s University of Southern California campus. Among the presenters will be Michael Bush, Les Crowder, Dr. May Berenbaum, Sam Comfort, Jacqueline Freeman, Michael Thiele, and many more. The conference is in Susan’s backyard, so to speak, and she would have loved being there.  She will be, in spirit, and she’ll be remembered with the presentation of a memorial scholarship. If you’d like to know more about that, send a note to info@honeylove.org.

Here are a few of the nearly 100 comments that Susan left on the pages of this blog. . .

“…my dad brought home some ponies from the auction when I was 6 and that was it for my “indoor life” anyway. Completely horse crazy for the next 15 years. Still don’t have TV either.”

November 5, 2018, responding to a post about philosopher/beekeeper Richard Taylor:

“Well, thank you for this!! I think Taylor would be extremely concerned with the current state of wealth consolidation in the US and the world generally. The wealthy of our administration seem hell-bent on mining and extracting for profit at a ever increasing rate, while the climate science directly instructs us to be going in the opposite direction.”

August 10, 2018, responding to a post about record heat in Calgary:

“I live in Los Angeles—Manhattan Beach, exactly, but the summers are getting hotter and the heat is more prolonged. Today, there are 22 major wild fires burning in our state, and so-called “fire season” which used to be Sept to Dec is now ALL year. We got a total of 4.79 inches of rain last year, all of it in Jan and March. My bees are struggling in a new apiary … in a rugged So Calif peninsula location surrounded by wild plants dessicated from prolonged drought. The heat is now so intense in summer that I have not only SBBs but fully ventilated screened tops under the top boards. My screened inner covers are the design found on HoneyBeeSuite here — https://honeybeesuite.com/how-to-make-a-screened-inner-cover/ Since my colonies are all foundationless (natural comb, no wires or foundation or plastics) they can melt under intense heat and crumple over. Once, I found honey running out the entrance onto the ground from some collapsed combs in my hives—I have mostly deep boxes. So, that is how I mitigate what is sure to be a ever more severe weather pattern of intense temperatures.”

December 27, 2017, responding to the man who discovered that bees can think:

“Thank you so much for this! von Frisch gets all the attention. This reminds me of the study of the double helix, in which Watson and Crick get the accolades by their research, but much has been made of how Rosalind Franklin’s images and research were fundamental to the W and C outcome.”

Finally, a month before her death, in Susan’s last contribution to this site:

“I keep wild (feral sourced) Apis mellifera, and assert there are thousands of wild colonies of honey bees in the Los Angeles basin. They are far from going extinct. Also, there is no connection between “honey bee farming” and the prosperity of wild honey bees.”

Ron Miksha is a bee ecologist working at the University of Calgary. He is also a geophysicist and does a bit of science writing and blogging. Ron has worked as a radio broadcaster, a beekeeper, and Earth scientist. (Ask him about seismic waves.) He's based in Calgary, Alberta, Canada. Ron has written two books, dozens of magazine and journal articles, and complements his first book, Bad Beekeeping, with the blog at badbeekeepingblog.com. Ron wrote his most recent book, The Mountain Mystery, for everyone who has looked at a mountain and wondered what miracles of nature set it upon the landscape. For more about Ron, including some cool pictures taken when he was a teenager, please check Ron's site: miksha.com.
View all posts by Ron Miksha →
This entry was posted in Culture, or lack thereof, Friends, People and tagged Africanized honey bees, California, natural beekeeping, Susan Rudnicki. Bookmark the permalink.