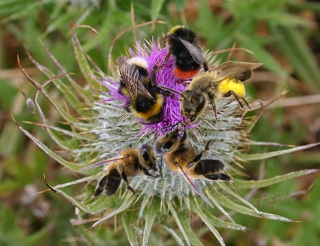 How does one get 50 different bee-specialists to work together on a project? Sounds like herding cats, if you ask me. But that’s what agricultural engineer Lucas Garibaldi of Argentina’s National University of Río Negro is doing. The fifty researchers were involved in a study of wild pollinators vs managed colonies of bees, examining the effectiveness of their pollination of 41 different crops – from almonds, cherries, grapefruit, kiwis, to zucchini cousins. The work was conducted in 19 different countries around the world. The finding was that wild bugs (bumblebees, beetles, flies, butterflies, among others) often do a better job – setting a higher proportion of flowers forming seeds and fruits.

In a task that must have involved decent eyesight, strong concentration, and an affinity towards boredom, the scientists counted visits of honeybees and wilder critters, then compared the numbers with crop yield. They found that an increase in visits by wild bugs can double the amount of fruit that a similar increase in visits by managed honeybees will have yielded. In other words, if 500 bees visit an apple’s flowering branch, then the honey bee count is increased to 700, maybe you get 6 more apples. If those extra 200 bugs are other non-honey bee pollinators, expect 12, not 6, extra apples. I’m not surprised. Different insects work under widely varying ranges of temperature, different times of day (and night) and different sorts of wind and sunlight conditions. Some flowers may be open at times that managed honeybees simply won’t get out of bed.

Now what? We may have reached a point where huge acreages of monocultured fruits and vegetables will give way to smaller groves and fields. Ecologically and environmentally, it would make a healthier world, of course. Honeybees would still be rented for optimal pollination services, but surrounding meadows and mixed woodlands would be home to co-pollinators. And the woods and meadows would also give the managed honeybees a better (more diverse) diet, keeping them healthier, and ultimately improve the grower’s pollination results even more. The paper’s abstract further states: “…visitation by wild insects and honey bees promoted fruit set independently, so high abundance of managed honey bees supplemented, rather than substituted for, pollination by wild insects.“

Ron Miksha is a bee ecologist working at the University of Calgary. He is also a geophysicist and does a bit of science writing and blogging. Ron has worked as a radio broadcaster, a beekeeper, and Earth scientist. (Ask him about seismic waves.) He's based in Calgary, Alberta, Canada. Ron has written two books, dozens of magazine and journal articles, and complements his first book, Bad Beekeeping, with the blog at badbeekeepingblog.com. Ron wrote his most recent book, The Mountain Mystery, for everyone who has looked at a mountain and wondered what miracles of nature set it upon the landscape. For more about Ron, including some cool pictures taken when he was a teenager, please check Ron's site: miksha.com.
View all posts by Ron Miksha →
This entry was posted in Bee Biology, Ecology, Pollination and tagged Argentina, bee species, Lucas Garibaldi. Bookmark the permalink.