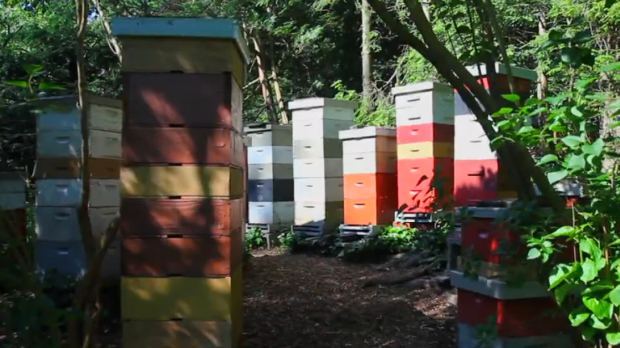 You can be one of the smartest economists in the world, and still not realize beekeeping is a lousy investment. The celebrated author and public speaker, Gary Shilling, who writes for The New York Times, Forbes, and The Wall Street Journal, and has apparently had a British coin named after him, nevertheless persists in keeping bees in his New Jersey back yard. A news team landed in his apiary and reported “It’s An Awful Lot Of Work To Raise Honey Bees In A New Jersey Backyard.” I imagine it’s an awful lot of work writing for the Wall Street Journal, too.

This guy, by the way, is a real beekeeper. The video news clip from Business Insider begins with Mr Shilling mixing something in a five-gallon bucket, workshop door wide open, and equipment stacked all over the place. Then it shows him igniting his smoker with a wildly flaming blow torch. Love the enthusiasm. The camera next swings up to his bee yard with a gorgeous shot of the hives, stacked higher than a basketball player and painted camouflage green. Except for some nasty creepy crawlers on the bottom board, things are neat and tidy. OK, maybe he is not a real beekeeper – things are too neat and tidy.

Does Shilling find beekeeping easy? After describing how the 85-pound boxes keep his tummy muscles in shape, he goes on to say that beekeeping is amazingly intellectually challenging. But you knew that already. What does Gary Shilling do with his 4,000 pounds of honey each year? He could probably retail it for $30,000, but he gives it away instead. Are we sure he’s an economist?

Ron Miksha is a bee ecologist working at the University of Calgary. He is also a geophysicist and does a bit of science writing and blogging. Ron has worked as a radio broadcaster, a beekeeper, and Earth scientist. (Ask him about seismic waves.) He's based in Calgary, Alberta, Canada. Ron has written two books, dozens of magazine and journal articles, and complements his first book, Bad Beekeeping, with the blog at badbeekeepingblog.com. Ron wrote his most recent book, The Mountain Mystery, for everyone who has looked at a mountain and wondered what miracles of nature set it upon the landscape. For more about Ron, including some cool pictures taken when he was a teenager, please check Ron's site: miksha.com.
View all posts by Ron Miksha →
This entry was posted in Bee Yards, Beekeeping, People and tagged economics, New Jersey. Bookmark the permalink.