Bees on a Caffeine Buzz

It seems bees may suffer from the same drowsy morning moods and weary fatigued afternoons as their human cousins. And it may be similarly cured with a jolt of joe.  For bees, the caffeine kick is sometimes provided by shrewd flowers that may cheat them out of copious volumes of nectar by supplying the mildly addicting drug instead. That’s right, some flowers may be tricksters that offer coffee instead of sugar in their nectar. The bees love it.

It takes substantial resources for a plant to secrete nectar. Nectar is largely fructose, glucose, and sucrose. Those sugars are expensive to assemble – plants use sunlight, carbon, hydrogen, and oxygen drawn from the environment and manufactured into nectar that attracts pollinators. A few plant species cleverly lace nectar with a little caffeine. This keeps the bees coming back to sip the spiked nectar and inadvertently pollinate blossoms. 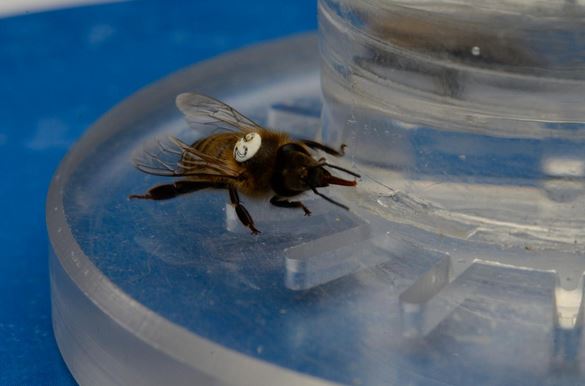 This might not be so bad, but it’s the insect world’s equivalent of spending the grocery money on booze. Addicted and unrepentant, the honey bee keeps heading back to the flower’s caffeine bar – even if the flower has quit secreting nectar. In a recent paper, researchers tell us that the plants’ tactics may result in 14.5% less honey production for the bees. To make things worse, the Swiss and UK researchers have discovered that honey bees get so hyped up on caffeine that they perform a wildly enticing waggle-dance, drawing four times the number of bee recruits towards the flowers with drugs than flowers without. Even more fascinating, earlier research has shown that caffeine significantly increases a bee’s memory, helping her find her way back to the garden drug pusher a lot more easily.

The scientists show that honeybees on caffeine are tricked into foraging harder for poorer nectar quality (lower sugar content) and tricked into recruiting more bees to forage caffeinated nectar than decaf. The full paper, Caffeinated Forage Tricks Honeybees into Increasing Foraging and Recruitment Behaviors, by Margaret Couvillon, Roger Schürch, and colleagues, can be found here, at Current Biology. 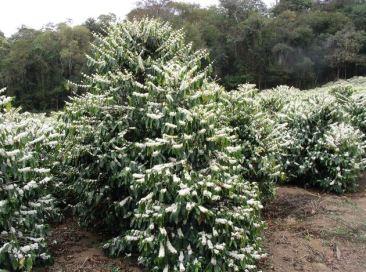 You may be wondering about coffee bean trees. They have flowers. The flowers secrete nectar. The plant needs pollinated. If caffeine is so seductive to bees, why isn’t the tropical world covered in coffee beans? Well, too much of a good thing can be a turn-off. The nectar from coffee plants carries a heavy bitter flavour which repels bees more than the drug attracts them. But an Italian foundation has been funding a project in Colombia with the goal of helping small producers supplement their green bean income with coffee honey. The program began its pilot project in 2011. Chemical analysis of the honey harvested from those Colombian coffee trees show it has more than 60% coffee pollen, making it eligible for unifloral marketing. However, although there are millions of acres of coffee plantations in the world, coffee bean honey hasn’t been generally available in the past. That’s because bees really don’t like working flowers with overly caffeinated nectar.  Bees, though, love the blossoms on citrus trees which offer both sufficient nectar and very discrete amounts of caffeine in a balanced and insect-friendly blend.

So, what’s the message here? Flowers are capable of becoming nasty tricksters in order to get what they need. But bees can be rather sly, too. If a flower’s floral tube is too long, the bee may chew through the side of the blossom, steal nectar, and by-pass pollination entirely. And in here in cowboy country, we regularly see a similar activity when honey bees work alfalfa, which has a rude habit of whacking a bee’s head with pollen as the bee tries to gather nectar. Smarter than the average legume, our honey bees quickly learn to sneak around the painful pollen trap, gathering nectar by the bucketful without doing the alfalfa any favours.

Ron Miksha is a bee ecologist working at the University of Calgary. He is also a geophysicist and does a bit of science writing and blogging. Ron has worked as a radio broadcaster, a beekeeper, and Earth scientist. (Ask him about seismic waves.) He's based in Calgary, Alberta, Canada. Ron has written two books, dozens of magazine and journal articles, and complements his first book, Bad Beekeeping, with the blog at badbeekeepingblog.com. Ron wrote his most recent book, The Mountain Mystery, for everyone who has looked at a mountain and wondered what miracles of nature set it upon the landscape. For more about Ron, including some cool pictures taken when he was a teenager, please check Ron's site: miksha.com.
View all posts by Ron Miksha →
This entry was posted in Bee Biology, Ecology, Honey Plants, Pollination and tagged bee communication, bee foraging, caffeine, coffee. Bookmark the permalink.

1 Response to Bees on a Caffeine Buzz