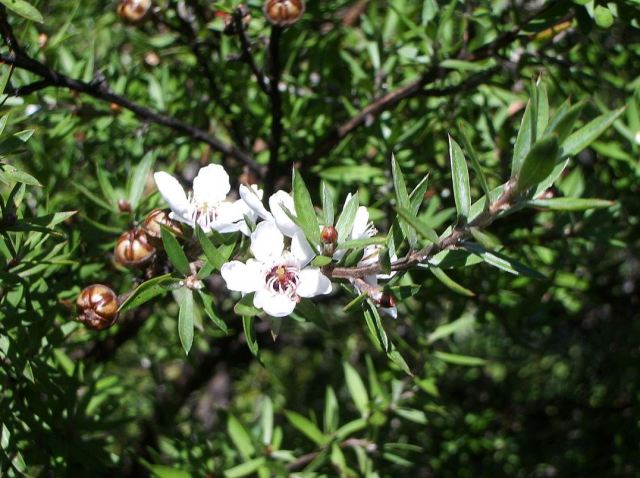 For years, I’ve been thinking that manuka honey is over-rated. And maybe overpriced, though every beekeeper’s honey should sell at $80/pound retail, as manuka sometimes does.  Why is manuka honey so expensive? It could be partly due to brilliant marketing. Having the gimmick that manuka has also helps.

Manuka’s gimmick is methylglyoxal, which adds to honey’s naturally high anti-bacterial activity. To hear some reports, if you drop either a super-bug or a Volkswagen beetle into a tub of manuka, the bug goes poof and it’s dead. All honey kills bacteria, most of the time, but some honeys are more effective killers than others. Diluted, the enzyme glucose oxidase in honey becomes hydrogen peroxide which kills germs. Honey also has an osmotic effect, drawing moisture out of bacteria to kill it. These and a few other factors  came to the attention of researchers looking for antibiotics to stop methicillin-resistant Staphylococcus. They found that honey is effective, as you may read in this paper from the US National Institutes of Health (among many other reports).

Manuka honey goes one step further. It has naturally occurring methylglyoxal, yet another potential bactericide. Unfortunately, there is evidence that all of this breaks down in heating and processing, so people serious about pursuing manuka honey seek raw, unfiltered, unheated samples. However, they may be wasting their money as there is no evidence that eating a bit of manuka will specifically kill bad bacteria, for example inside a diabetic ulcer. In raw form, manuka is likely very effective applied topically on wounds. But so are buckwheat, canola, and alfalfa honeys (to name just a few). If we have a cut or a burn in our household, we often treat it with honey.

In most parts of the world, including New Zealand, it is against the law to add anything to honey. We mentioned one of the allegedly added materials in question, methylglyoxa, just a moment ago as the special natural antibiotic found in manuka honey. The other ingredient, dihydroxyacetone is found in manuka nectar and breaks down to become methylglyoxa.  If these were added to the honey, as alleged on the MPI website, what could be the reason?

We don’t know why the honey was contaminated, of course. Evergreen Life Limited is a large and reputable company. If a less reliable organization had added methylglyoxa to their products, we might conclude that real natural manuka was in short supply so other honey was used (at $2/pound), fortified with methylglyoxa, and then sold as manuka (at $80/pound). You see, manuka is inspected for its level of methylglyoxa. Without enough methylglyoxa, honey can’t be certified as manuka honey. And once certified, it fetches a higher price if the methylglyoxa level is higher.

It is unlikely that Evergreen would have intentionally jeopardized its reputation and called into question the purity or naturalness of its products. The company may have been the victim of sabotage from a recalcitrant employee. Or the investigating ministry may be mistaken and methylglyoxa might not have been added after all. Managing this recall is surely a nightmare for the people managing Evergreen.

The NZ government food safety website stresses that there is no food safety risk associated with the recalled products, which are listed as 18 different labeled items. No health risk, but the MPI does tell the public “if you have consumed this product and have any concerns about your health, contact your doctor or seek medical advice.”

The New Zealand Ministry of Primary Industries adds, “Customers should return the product to the retailer for a full refund.”

Getting a refund should be easy as Evergreen’s website says they guarantee their products: “Every step of our manufacturing process not only meets, but exceeds domestic and international statutory requirements. At Evergreen, we only use top quality natural resources and the quality of our products are always guaranteed.”

Ron Miksha is a bee ecologist working at the University of Calgary. He is also a geophysicist and does a bit of science writing and blogging. Ron has worked as a radio broadcaster, a beekeeper, and Earth scientist. (Ask him about seismic waves.) He's based in Calgary, Alberta, Canada.
View all posts by Ron Miksha →
This entry was posted in Apitherapy, Hive Products, Honey and tagged adulteration, manuka, natural, New Zealand, organic honey. Bookmark the permalink.