Too much to do…

During the past two weeks, I flew from Calgary to Cincinnati (and back again); organized, prepared, and co-presented a day-long beekeeping economics program; ran a 2-hour ecology school at the neighbourhood elementary; was an invited “expert” at ask-an-expert night at the bee club; and co-judged all the entries for the Calgary Stampede’s first-ever honey show. Somehow I even completed a geological mapping project for a Colombia, South America, client. The last on the list represents my day-job and it’s not as exciting as it sounds.

So, two weeks ago, I flew back home to Calgary from Cincinnati. It was my first trip to the USA in almost ten years. If a person visits The States after a decade’s absence, you’d think they’d go to Florida, or Manhattan, or San Francisco, right?  Well, this impromptu trip arose from a benign but indomitable set of circumstances – I was pulled along by circumstance.

My wife and our two school-age youngsters were enjoying spring break with family in central Europe. They took a quick, one-week, pop-in/pop-out trip. I’d been there last summer, so I thought I’d stay home and write blog posts or something.  But then I thought I should fly to San Diego to see my sister. She comes up to Calgary every year, so I certainly needed to return the visit. But during spring break, my sister would be travelling to Cincinnati to see her twin, a young lady about the same age as she, as you can see in the pic below:

My sisters and I at Cincinnati’s Krohn Conservatory

I went to Cincinnati to see two sisters with one flight, so to speak. Then more family started to appear, like robber bees scenting spilt honey. Well, actually more like spring flowers gracing an alpine meadow – these are wonderful people whom I’d not seen in years. It was all good.

I had been to Cincinnati a few times in my younger days. I already knew about its enticing lack of tourist attractions and its disquieting weather. But there is now a new Freedom Museum (celebrating  dreadful stories about the Underground Railroad and America’s escaped slaves who, making it across the Ohio River, into Cincinnati, connected to routes north to Canada) and there is the old architecturally stunning and historically inspiring Plum Street Temple where the American Judaic Reform movement began. So, even if five of my siblings had not shown up to greet me, there would have been things to see and do. 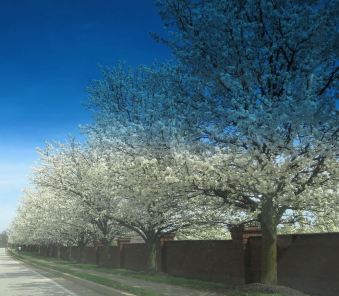 Although the Ohio River’s Queen City is known for icy winter roads, gray gloomy skies, and sweltering summers, I knew that spring in Cincinnati could be delightful. Except for a day of tornadoes, it was.

My first glimpse of the rolling hills as my plane dropped towards the airport revealed thousands of stunning white trees – dogwoods and cherries sporting glorious blossoms. Driving towards my sister’s home, I snapped dozens of pictures of tulips, daffodils and forsythias. The next day, at the Krohn Conservatory, we were regaled by exotic tulip-flowered magnolias in pink and purple costume. The grass was green and the sun shone sweetly.

I didn’t see honey bees. There were a few bumblebee types and some butterflies, but the honey bees were notable for their absence. I knew that on this brief visit I wouldn’t have time to track down local beekeepers, so I didn’t even try. If you are not a beekeeper, you’d think that honey bees would do well among the tulips and daffodils, but you’d be wrong. Not every flower feeds honey bees.

Beekeepers in this area are intrepid souls, keeping bees for the love of it, not for any certainty of wealth. Changeable weather, acidic soils (which turn clover and alfalfa into weeds rather than fountains of nectar), and extensive corn fields all conspire against the beekeeper.  In my younger days, I parked two hives of bees in an oak grove near Florence, Kentucky, ten kilometres south of Cincinnati. I did this so that my oldest sister’s family could experience bees. The bees died within two years. Not due to neglect or mites (this was in the days before either neglect or mites existed) but instead due to the relentless wearing down of bees kept where bees do poorly.

Very pretty, but not a honey bee’s paradise.

At our four-day-long reunion, the laughter and stories were warm and nostalgic.  I am a middle child of ten kids so I had the mediator’s position of watching four older and five younger siblings grow up, then disperse across North America from our childhood subsistence farm on the edge of Pennsylvania’s Allegheny Mountains. There was much to reminisce, some of it charming, some of it tragic.

Too often,  there is too much to do. Connecting with an extended family gets sublimated to the duty of nurturing one’s closer family. I left Cincinnati and flew back to Calgary, where my wife and youngsters were arriving the same evening from Europe. Then it was back to preparing the bee course, the ecology lesson, the honey judging, the geology mapping. These were all interesting, entertaining, and successful and will be subjects of future blog posts. But the journey into America’s heartland and the time spent with far-away family will remain in my memory for a long time.

Ron Miksha is a bee ecologist working at the University of Calgary. He is also a geophysicist and does a bit of science writing and blogging. Ron has worked as a radio broadcaster, a beekeeper, and Earth scientist. (Ask him about seismic waves.) He's based in Calgary, Alberta, Canada.
View all posts by Ron Miksha →
This entry was posted in Friends and tagged Cincinnati, Kentucky. Bookmark the permalink.