Buzz the Bee is on Vacation 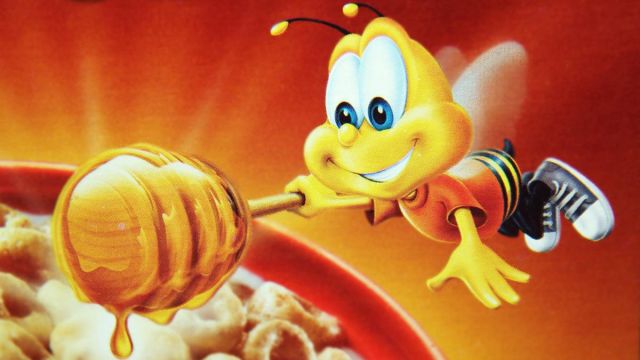 General Mills is sending Buzz the Bee, their cheerful Honey Nut Cheerios spokesbug, on vacation. Or into hiding. In a campaign bound to raise awareness for the world’s suffering bees, and maybe to inadvertently sell more Cheerios, packages of the breakfast cereal will temporarily be gloomy boxes of oats without happy Buzz images. The hapless bee left without saying “Goodbye”, “So long”, “Ciao”, or even “Cheerio”. Buzz simply left us one cold dreary morning.

General Mills (GM) says they have sequestered their happy bee so that bloggers such as I might write about the world’s missing bees, bringing attention to the plight of bees. No one doubts that bees are plighted. With climate change and our chemically soupy environment, it’s getting rough for all sorts of creatures. There were once about 25,000 species of bees in the world, now there are hundreds fewer. The honey bee is just one  species of bee (Buzz the Bee is a subspecies of honey bee, technically it is Apis mellifera generalfoodi). Humans are preventing honey bees from going extinct, but less celebrated bees, such as Diphaglossa gayi are pretty much on their own – and are becoming rare.  (When was Diphaglossa gayi, the Chilean Valdivian Forest Forked-Tongue Bee, last seen on a box of cereal or a carton of milk? Huh?)

GM’s people tell us that “Buzz is missing because there’s something serious going on with the world’s bees . . With deteriorating bee colony health, bees everywhere have been disappearing by the millions and it’s time we all did something about it.”  To bring back the bees, General Mills is giving away packages of seeds. Put a few seeds in the ground and before long you’ll have bees. Not directly from the seeds, by the way, but from the wildflowers that may grow from the seeds that will feed the bees.  Why not?

The free seeds seem to be a Canadian give-away. This  offer might not be available if you don’t naturally say ‘eh’,  eh?  Anyway,  the free wildflower seeds are at the other end of this link.  “With ongoing losses in bee populations being reported across Canada, we’re issuing a call to action to Canadians to help plant 35 million wildflowers — one for every person in Canada,”   says Emma Eriksson, Director of Marketing for General Mills Canada.

What can you do to bring the General Mills cartoon bee mascot back from its hiatus? Buy cereal! Let GM know that you miss their goofy bee. With enough of us stocking up on Honey Nut Cheerios (We bought 3 boxes!),  it will send a loud and clear message. We want Buzz back!  And hurry – we won’t survive long (Einstein says 4 years.) without Buzz the Bee on cereal packages.

Ron Miksha is a bee ecologist working at the University of Calgary. He is also a geophysicist and does a bit of science writing and blogging. Ron has worked as a radio broadcaster, a beekeeper, and Earth scientist. (Ask him about seismic waves.) He's based in Calgary, Alberta, Canada. Ron has written two books, dozens of magazine and journal articles, and complements his first book, Bad Beekeeping, with the blog at badbeekeepingblog.com. Ron wrote his most recent book, The Mountain Mystery, for everyone who has looked at a mountain and wondered what miracles of nature set it upon the landscape. For more about Ron, including some cool pictures taken when he was a teenager, please check Ron's site: miksha.com.
View all posts by Ron Miksha →
This entry was posted in Humour, Save the Bees, Strange, Odd Stuff and tagged bee extinction, Benny the Bee, Buzz the Bee, Cheerios. Bookmark the permalink.

4 Responses to Buzz the Bee is on Vacation