Regular readers of this bee blog know that I avoid politics with as much self-discipline as most people avoid lounging on sunny days on a south-facing deck. This is a bee blog, not a political blog. If I ever mention liberty, secularism, or social justice, you know it’s just common sense, not politics  – right?

But with the viral eruption of the Canadian prime minister’s quantum physics lecture (now shared by a million Facebook users), I thought I’d be safe saying a few words about Justin Trudeau’s politics of personality. If you missed it, here’s the former science teacher’s explanation of quantum computing, delivered on Friday at Canada’s theoretical physics lab:

Canada’s prime minister was likely briefed, but he skillfully carried the day. At his press conference, the question that prompted Trudeau’s science lesson actually was about Canada’s role in fighting ISIL terrorists. At first, Trudeau side-stepped the question and responded to the reporter’s joke, which was about quantum computing.  The prime minister proceeded to describe the difference between binary and non-binary systems. It was a cute and charming retort, drew laughs, and astonished non-scientists. But the shared videos (including the one above) sell the prime minister short because at the press conference, his jest was just a prelude to his explanation that fighting terrorism is not an on/off or yes/no binary challenge, but is more nuanced – sort of like quantum physics. The attention he got for his prelude, which received far more attention than his more serious second point, tells us much about politics, successful politicians, and the susceptive public.

It takes work to be a successful politician.  A few years ago, a friend of ours met Justin Trudeau in southern Alberta. Trudeau was not the prime minister of Canada at the time. Our friend – Jacques – presented a comb of honey from our honey farm to the young politician. Jacques loved bees, had helped with our honey farm regularly, and was a part of our circle of friends. He once told me that bees (along with his wife and six kids) were one of the few pleasures he had as his days were becoming more and more difficult. Here you can see Jacques in a picture I took of him a year before he died of a long-term illness. As you can see, Jacques was something of a bee-charmer. 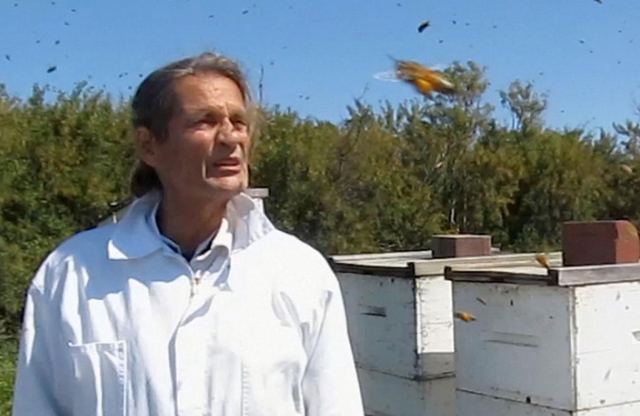 When Jacques met Justin Trudeau, the future prime minister spoke a few words in French, thanking Jacques for the honey and telling him that his father (Pierre) regularly bought comb honey for the family when Justin was a child.  A week after they met, we received a hand-written letter which arrived in the mail at our honey farm. It was from Justin Trudeau, addressed to our farm, and directed to “Jacques”.  I think that Trudeau’s staff used the label on our honey comb to look up the mailing address on our website and then Trudeau wrote his thanks, commenting about how long it had been since he had eaten such good comb honey. To a beekeeper, a honey compliment ranks with a strong handshake. (In turn, Jacques gave me the letter –  I treasure it.)

I’ve met other politicians but few make such efforts to be gracious. Some will forget you as soon as they turn away.  You can be sure that my accolade is not intended as validation of everything Justin Trudeau’s government is doing. But the man’s wit, charm, and grace are a genuine reflection of his effort to do his job as a politician and are probably an accurate depiction of his personality. 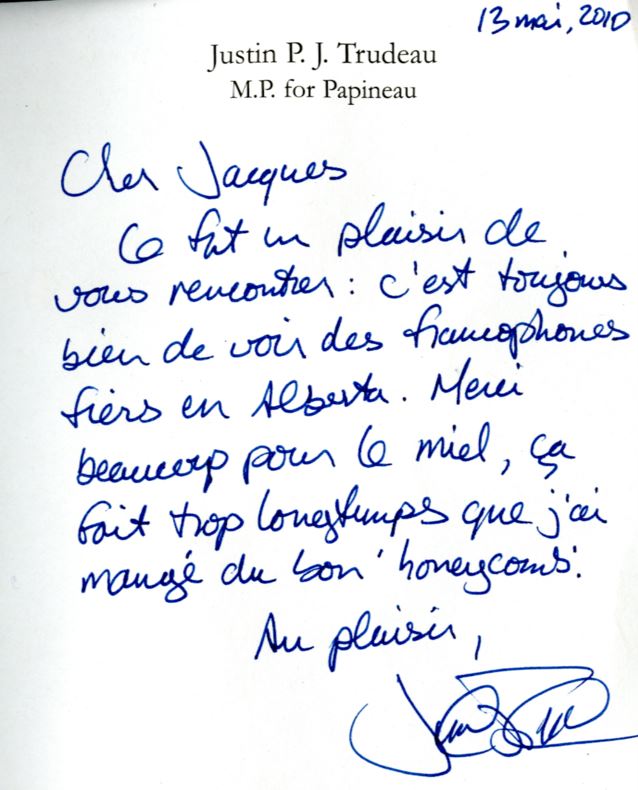 Justin Trudeau’s gracious note of thanks for the honeycomb.

Ron Miksha is a bee ecologist working at the University of Calgary. He is also a geophysicist and does a bit of science writing and blogging. Ron has worked as a radio broadcaster, a beekeeper, and Earth scientist. (Ask him about seismic waves.) He's based in Calgary, Alberta, Canada.
View all posts by Ron Miksha →
This entry was posted in Comb Honey, Friends, Outreach and tagged Alberta, Comb Honey, Justin Trudeau, politics. Bookmark the permalink.