The rhododendron is a beautiful plant, but it’s rumoured to intentionally maim and kill honey bees.  My mother had a favourite rhododendron bush in the yard by our house in the Appalachian foothills. Now that I am older and presumably wiser, I’m surprised that we had rhododendrons on our farm at all. If its nectar kills honey bees, the plant would have been cursed by the  dozens of hives stationed on the hillside behind our house.

But rhododendrons are nice. They include over a thousand species and 28,000 cultivars, according to the International Rhododendron Registry. Almost everyone in the right temperate zone wants one.  The extensive family of ‘rose-trees’ (as the Greek name ‘rhodo-dendron’ translates) includes tree-like shrubs with rose-like flowers. It also includes the common azalea, a smaller and less showy type of rhododendron.  When I was in northern Kentucky last month, azaleas were beginning to bloom. The ridge line of the Appalachian mountains is erupting in rhododendron scent at this moment.

People have long noticed the sweet honey smell of rhododendron flowers and wondered why bumblebees liked them but honey bees didn’t. Here, for example, is a description of the plant  from John Lovell’s 1926 book, Honey Plants of North America: (1)

Do you notice how Lovell begins by telling us that rhododendrons are bumble-bee flowers?  Although beekeepers reported sweet nectar falling in large drops from the rose-shaped flowers, they claimed that honey bees ignored the plant.  Bumblebees, however, were seen working it. Lovell does not elaborate and does not mention that for honey bees, rhododendron nectar may be poison.

There is some debate about whether honey bees actually visit rhododendrons. If the nectar is toxic, we might guess that scouts which return with the stuff are looked upon rather disapprovingly by their fellow bees. Or maybe the scouts simply die in the field, never reporting their finds to their hive-mates. However, bees must store some of it because there are accounts of people becoming sick from rhododendron honey. With over a thousand species, it is likely that some rhododendrons produce stronger potions of poisons than others. This, I think, could explain the discrepancies in the reports.

For example, a European variety of rhododendron (R. ponticum) is visited by honey bees. Those bees produce a mildly toxic honey that was once allegedly used during wars to poison invading enemy troops. Stories tell of soldiers finding rhododendron honey left by fleeing citizens. According to legend, the invaders sometimes ate enough of the tainted honey to become too sick to fight. 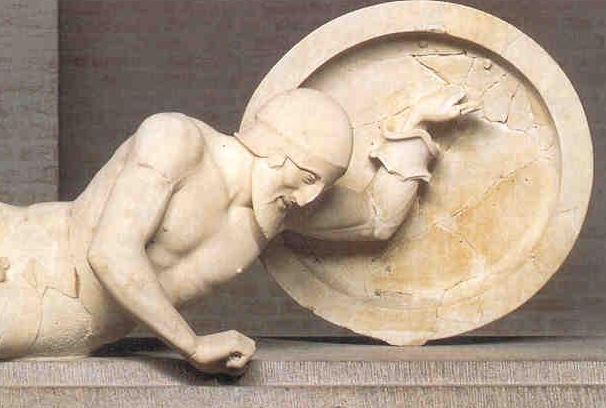 Maybe it was something he ate.

These days, it is the European rhododendron itself which has become the invader, occupying vast stretches of Wales and some of England’s southern heaths. It displaces native vegetation when it escapes backyard gardens. It is spread by prolific seed production and maintained by stubborn suckers and green-thumbed blokes. You can read a delightful and informative piece about the European rhododendron at Emily Scott’s site, Adventures in Beeland.

To me, the existence of toxic nectar is a scientifically intriguing puzzle. Why would plants generate nectar that poisons pollinating insects? That sounds counter(re)productive. We have come to believe that flowers evolved to attract pollinators with nectar. Happy bees make happy flowers. Dead bees don’t.

The answer may be in an article in the journal New Scientist. It’s a piece called  Bitter sweet nectar: Why some flowers poison bees.  Why do flowers do this nasty deed? One of the answers is clever and may even be correct. According to Stephanie Pain in her 2015 report, some ecobiologists think the rhododendrons are selecting a certain subclass of pollinators – bumble bees – that have evolved to tolerate rhodo-poisons called grayanotoxins. These have different effects on different bees. “They have no apparent effect on worker bumblebees.  Mining bees show short-term symptoms of malaise. They lie on their backs with their legs in the air but recover later.  But honeybees die within hours.“

It seems that European rhododendrons have been poisoning honey bees as a favour to bumblebees. The bumblebees tolerate the toxin and pollinate the flowers. This assures a surplus of food for the preferred pollinator. Other bees are simply dispatched – dead or wounded – leaving more food for the true friends of the flower.  This would explain why, a hundred years ago, John Lovell wrote “The Rhododendrons are bumblebee-flowers.”  Indeed they are.

(1) 1926. John Lovell, Honey Plants of North America, p 194. Since the reproduction above may be hard to read, here is what the text says:

RHODODENDRON.  The Rhododendrons are bumblebee-flowers. The following report from a beekeeper at Divide, West Virginia, is noteworthy : “I am reasonably sure that honeybees never visit the Rhododendron in this locality.  Last season tons of nectar dropped from the flowers by my apiary, but I was unable to find a single bee on the bloom. The nectar fell in large drops, was pleasant to the taste, and very sweet. The Rhododendrons cover the land for mile after mile, and when in blossom present a most beautiful appearance.”   A number of observers have reported visits to the bloom by several species of the larger bees, but the Rhododendrons are not listed as honey plants in any state. The flame-colored azalea (R. calendulaceum) is exceedingly abundant in the mountains of North Carolina.

Ron Miksha is a bee ecologist working at the University of Calgary. He is also a geophysicist and does a bit of science writing and blogging. Ron has worked as a radio broadcaster, a beekeeper, and Earth scientist. (Ask him about seismic waves.) He's based in Calgary, Alberta, Canada.
View all posts by Ron Miksha →
This entry was posted in Bee Biology, Ecology, Honey Plants, Pollination and tagged Appalachian, azalea, bees in warfare, John Lovell, poisoned bees, poisonous honey, rhododendrons. Bookmark the permalink.