Cotton Picking Time on the Prairie

I’m posting this a bit late. It’s about something that happened two weeks ago. My 9-year-old daughter and I were in a neighbourhood park and we noticed lots of fluffy white stuff floating through the air. Lots and lots. It looked like snow, actually.

I told her that it was probably from the dandelions which were finishing their spring bloom. But neither she nor I were particularly convinced. Then she pointed toward a row of trees on the far side of the park. “Look, it’s coming from over there.” She was right. We were getting snowed-in by cottonwood trees.

In all my years, I had never ventured to examine these poplars up close while they were shedding their seeds. The trees are rather large so their seeds and fluff are usually out of reach. Besides, I’ve always been too busy making a living to think much about the tree, except to recognize the nuisance it causes when sap drips from the buds in May and fluff fills the yard in June. But my kid doesn’t know the priorities of life yet, so she ran across the big park and came back to me with a branch of the cotton in full production. You can see it here. 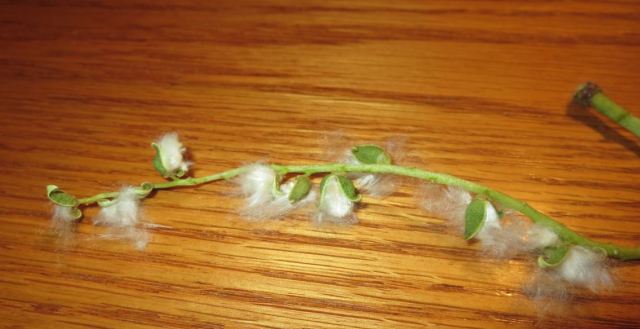 Looking at the expired catkins and their opening buds of fluff, it occurred to me that one of the tales I’d heard from old-timers might be true. They claimed that when they were children, they were sent up into massive cottonwood trees with rakes to collect cotton. The women folk would spin the cotton and make socks and snugly caps for newborns. I didn’t believe the stories and said so. I was told, quite rightly, that kids these days don’t know what hard work really is. That part is true enough. We have it easy these days, but that’s not all bad. I knew people who were killed by their work and children who never became adults because of farm accidents. I’d rather not have to send a child up a tree with a rake to collect cotton from a poplar tree – unless we really, really needed socks.

Things were different in the old days. On the Pennsylvania farm where I spent my childhood – middle kid in a family of ten – we worked hard and did without. I’d worked so hard as a kid that I once drove a bee truck into the ditch, having fallen asleep from too many hours working. Or maybe it was because I had siphoned leaded gasoline from a barrel to fill the truck earlier that day and I’d inhaled a lung full of gas in the process. Try to tell young people today what it was like when you were a kid – they won’t believe you.  Though I’ll admit that it wasn’t as bad for me as it was for the four Yorkshiremen in this video, over in north England at about the same time:

Ron Miksha is a bee ecologist working at the University of Calgary. He is also a geophysicist and does a bit of science writing and blogging. Ron has worked as a radio broadcaster, a beekeeper, and Earth scientist. (Ask him about seismic waves.) He's based in Calgary, Alberta, Canada. Ron has written two books, dozens of magazine and journal articles, and complements his first book, Bad Beekeeping, with the blog at badbeekeepingblog.com. Ron wrote his most recent book, The Mountain Mystery, for everyone who has looked at a mountain and wondered what miracles of nature set it upon the landscape. For more about Ron, including some cool pictures taken when he was a teenager, please check Ron's site: miksha.com.
View all posts by Ron Miksha →
This entry was posted in Culture, or lack thereof, Humour and tagged cottonwood, Monty Python. Bookmark the permalink.