The Price of Honey

The price of honey has been falling for over a year. Honey is such a strange commodity. It’s agricultural. It’s ubiquitous (produced on all but one continent). It’s easily transported. Doesn’t need refrigerated. Doesn’t spoil (though quality may diminish with time and circumstance).  Sometimes honey is produced in primitive conditions; sometimes in ultra-modern facilities. It has widely varying colours and flavours, yet it’s fungible, which means that a bit of clover honey produced in Argentina is pretty much interchangeable with a bit produced in Minnesota or Kazakhstan. With all of this in mind, it is interesting that the price is so volatile – we’ve seen honey prices nearly double in a single year, but also fall to nearly half within months.

Last year, Canadian beekeepers received about $2/pound for their crop, according to the USDA. Here’s a clip from the January 2015 National Honey Report:

Then, 15 months later: here is the US government’s National Honey Report for May 24, 2016, showing prices paid to Canadian beekeepers for their honey sold to American packers. It’s not pretty:

Historically, beekeepers have earned a marginal living. To stay viable as commercial operators, most have expanded and stream-lined their production. In the 1970s, a commercial beekeeper might have operated between 600 and 1200 colonies. That was enough to feed and cloth a flock of kids and keep the honey farm going. Honey was 50 cents a pound.  That was almost 50 years ago. Minimum wage at the time was less than $5/hour. Gasoline was 36 cents a gallon. Money went a lot further, even though there wasn’t much of it

As part of a course I help teach – Making Money from Honey – I prepared a graph of wholesale honey prices compared to average labour. Here’s how to make sense of my chart. On the left (the y-axis), you see the wholesale price of honey in dollars. Along the bottom are years, from 1910 to today. The purple line is the wholesale price of honey in US money. It has mostly risen over the past century. The red line is wages, also in dollars, for the average semi-skilled labourer for each 6 minutes of his or her time. So, today, that person (a bee inspector, or computer operator, for example) is paid about $22/hour or $2.20 for each 6 minutes of her time. At the beginning of the last century, using federal statistics for average wages, people made just a few cents every six minutes –  for example, my grandfather earned $5 for a 10-hour workday in 1915 building railroad cars. My grandfather made 5 cents every six minutes. Honey at the time wholesaled at 9 to 12 cents a pound. Beekeepers in 1915 did well. 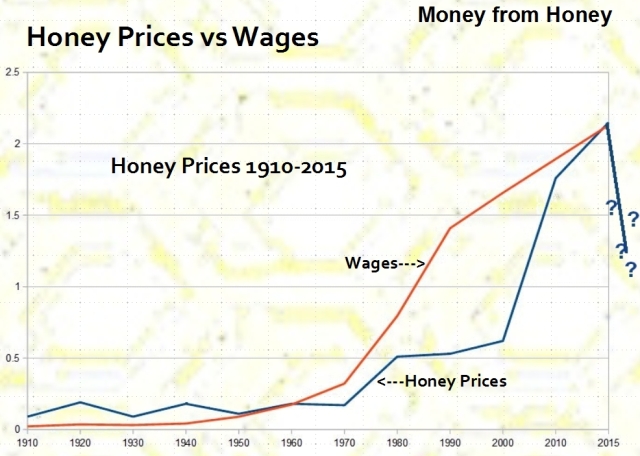 From the chart, you can see that during the first half of the 20th century (1910 to 1950) a pound of honey was worth more that 6 minutes of a worker’s time. That era is sometimes called the Golden Age of Beekeeping, a reference to something other than the colour of honey.

After 1950, beekeepers struggled. Beekeepers tried to survive with more efficient production. But thousands of beekeepers simply quit and took better-paying employment. America’s beehive count fell from 10 million hives in 1915 to 3 million by the 1970s. This wasn’t caused by neonicotinoids, mites, or colony collapse disorder – those hadn’t entered the scene yet – it was simply a response to bee economics. In the past few years, the price of honey spiked. For the first time in generations, beekeepers were financially comfortable with their career choice.

If you pick beekeeping for a livelihood, you should be aware that the past few years have been unusually good. Now it’s getting less good. But you might be encouraged to know that self-disciplined, hard-working beekeepers who are good money managers have been able to stay with bees through the worst of times – if they are also lucky. In that way, beekeeping is like almost any other business.

Ron Miksha is a bee ecologist working at the University of Calgary. He is also a geophysicist and does a bit of science writing and blogging. Ron has worked as a radio broadcaster, a beekeeper, and Earth scientist. (Ask him about seismic waves.) He's based in Calgary, Alberta, Canada. Ron has written two books, dozens of magazine and journal articles, and complements his first book, Bad Beekeeping, with the blog at badbeekeepingblog.com. Ron wrote his most recent book, The Mountain Mystery, for everyone who has looked at a mountain and wondered what miracles of nature set it upon the landscape. For more about Ron, including some cool pictures taken when he was a teenager, please check Ron's site: miksha.com.
View all posts by Ron Miksha →
This entry was posted in Beekeeping, History, Honey and tagged business of beekeeping, honey prices. Bookmark the permalink.

6 Responses to The Price of Honey