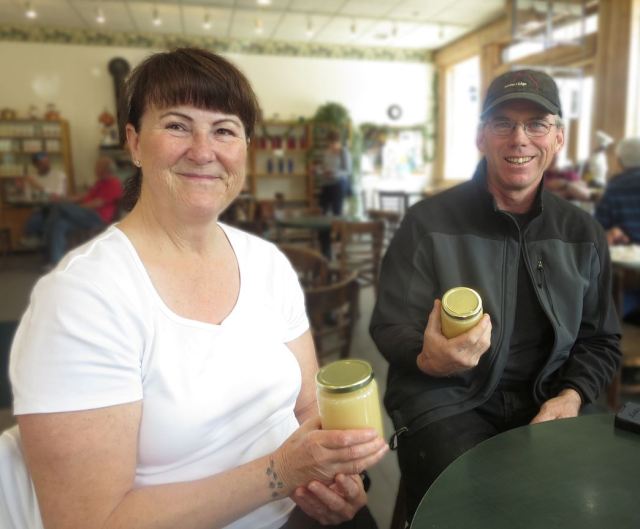 Brenda and Mike with some of their creamed honey

If you get the American Bee Journal, you may have seen my article about creamed honey in this month’s issue. I wrote the piece because I think smooth creamy honey is a great product and because some friends of mine make some great creamy honey. My friends are Brenda and Mike. Mike mostly works the bees, some of which are kept at Mike’s place in the Rocky Mountain foothills. Brenda mostly handles the honey smoothing at her home.

I don’t know what you might call this extra smooth honey – some people call it creamed (though no dairy products are involved), spun (though no spinning is involved) or smooth (which it certainly is!).  My article goes through a lot of details which I won’t cover here, but I’ll give you Brenda’s recipe: 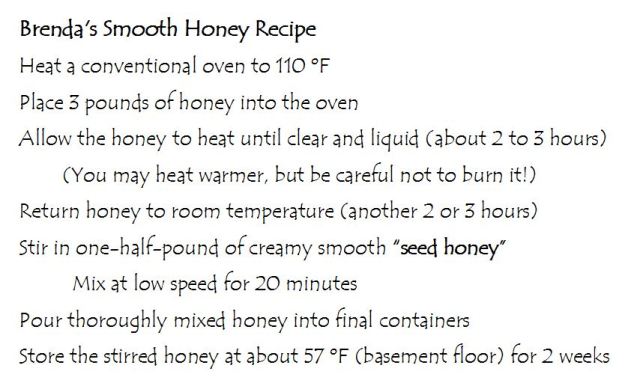 It’s actually pretty simple. Heat the honey until it’s completely liquid with no granulation crystals left in it. Cool it to room temperature and stir in some creamy ‘seed’ honey. Stir and stir and stir. Pour it into the final containers and store it in a cool place.  The seed can be creamed honey from your previous batch of creamed honey. If this is your first year making the stuff, you’ll have to get some creamy (“spun”) honey at the grocery or from a friend. After that, keep some in reserve for the next crop. People use from 5 to 20 percent seed, but most add about 10 percent. 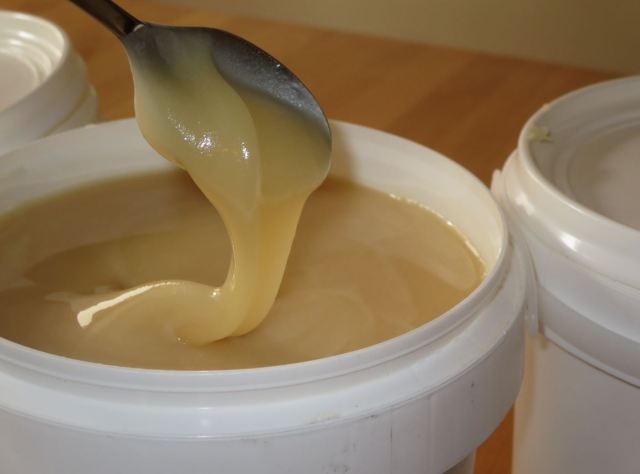 Once ‘creamed’, the honey will stay this smooth for months – or even years.

Ron Miksha is a bee ecologist working at the University of Calgary. He is also a geophysicist and does a bit of science writing and blogging. Ron has worked as a radio broadcaster, a beekeeper, and Earth scientist. (Ask him about seismic waves.) He's based in Calgary, Alberta, Canada. Ron has written two books, dozens of magazine and journal articles, and complements his first book, Bad Beekeeping, with the blog at badbeekeepingblog.com. Ron wrote his most recent book, The Mountain Mystery, for everyone who has looked at a mountain and wondered what miracles of nature set it upon the landscape. For more about Ron, including some cool pictures taken when he was a teenager, please check Ron's site: miksha.com.
View all posts by Ron Miksha →
This entry was posted in Friends, Hive Products, Honey and tagged American Bee Journal, creamed honey, spun honey. Bookmark the permalink.