Ambrosia. n. nectar; food or drink of the Greek gods which confers longevity

Break out the mead – it’s St. Ambrose Day! Ambrose is the patron saint of beekeepers, a task he’s had since the day in 340 when he was born. A swarm settled on his face as he slept in his cradle. The bees moved on to a better nesting site, but left a drop of honey on his lips. Saint Ambrose Senior took the event as a sign that his son would become a honey-tongued orator.

Saint Ambrose, aka Aurelius Ambrosius, was a politician before he entered the clergy and became the bishop of Milan. Ambrose was a staunch opponent of Arianism (the heretical belief that Jesus is God’s son) and he led persecutions of Arians, Jews, and pagans, thus consolidating the power of the ascending Church. One thousand years after he died, the Church elevated him to “Doctor” of the Church, a promotion (not a posthumous medical degree) that recognized his role in doctoring the Church’s early theology.

His sainthood recognizes his exemplary and celibate lifestyle and such intriguing observations as “giving to the poor was not to be considered an act of generosity towards the fringes of society but as a repayment of resources that God had originally bestowed on everyone equally and that the rich had usurped.” To modern ears, it sounds like Saint Ambrose’s was a communist.

In addition to being a theologian, politician, and equalizer of wealth, Ambrose is sometimes credited with teaching the world to read silently, instead of aloud. (Keeping his honeyed tongue to himself.) He described a key event in his religious conversion as a moment of silent reading with a friend.  In Saint Augustine’s Confessions, you’ll find this:

“When [Ambrose] read, his eyes scanned the page and his heart sought out the meaning, but his voice was silent and his tongue was still. Anyone could approach him freely and guests were not commonly announced, so that often, when we came to visit him, we found him reading like this in silence, for he never read aloud.”

Ambrose had other talents, too. He was the composer of Veni redemptor gentium, an Advent hymn written by him using iambic dimeter. He also promoted a choir style called “antiphonal chant”, which you may hear here.

But getting back to the bees. A swarm landed on Ambrose when he was a young. We’re not told how long they stayed but we learned that the bees left him honey-lipped.  That’s pretty much it for Saint Ambrose and the bees.

Nevertheless, Ambrose is patron saint of bees, beekeepers, and candle makers. In Ambrose’s writings, bees are mentioned only a couple of times. Because of his musings about ownership of property, I thought he’d relate how all the bees in a hive share their food equally and if starvation strikes, every bee continues to share until they all die en masse, at the same sad time. But instead, Saint Ambrose was more preoccupied with celibacy. In his few lines about bees, he connects them to celibacy.  The Catholic Encyclopedia says Ambrose had an “enthusiastic love of virginity which became his distinguishing trait.” Here’s how Saint Ambrose ties bees and virginity together.

Ambrose didn’t know that worker bees are female virgins – that idea wasn’t figured out for another 1,500 years. He thought the queen was a king. And Ambrose believed that bees spontaneously generate (without sex) from dew on flowers where older bees gather them up and carry them back to the hive. As Ambrose observed  “virginity is fit to be compared to bees…  The bee feeds on dew, it knows no marriage bed, it makes honey… How I wish [women] to be an imitator of bees whose food is flowers, whose offspring is collected and brought together by the mouth….”  The idea that baby bees were collected by mouth from flowers was the state of the science in fourth-century Europe. 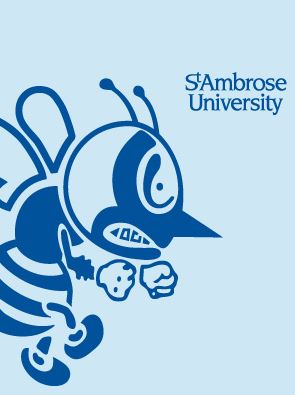 That’s about all I could find relating the patron saint of beekeeping to bees. I guess we make more of it than Ambrose himself did.

Today, the Ambrosian bee link is mostly forgotten, except among some St Ambrose University sports teams where Fighting Bees is a warrior symbol. But we might still light a candle for the old saint.

Ron Miksha is a bee ecologist working at the University of Calgary. He is also a geophysicist and does a bit of science writing and blogging. Ron has worked as a radio broadcaster, a beekeeper, and Earth scientist. (Ask him about seismic waves.) He's based in Calgary, Alberta, Canada.
View all posts by Ron Miksha →
This entry was posted in Culture, or lack thereof, History, Strange, Odd Stuff and tagged candles, honey in religion, Saint Ambrose. Bookmark the permalink.

3 Responses to Some Ambrosia