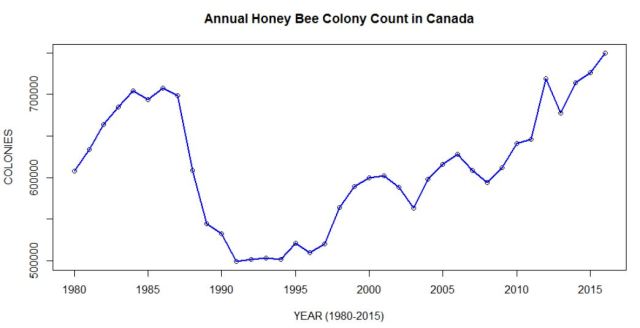 Yesterday, Stats Canada released honey bee numbers for 2016. Canada now has more colonies ever. That’s  right – more hives of honey bees than ever, in all of our recorded history. Our numbers are now over 750,000 colonies.

The last time Canada had a big colony count ramp-up was in the mid-1980s. We reached 707,000 colonies in 1986. Then, over the next three years, our colony count collapsed to below 500,000 hives in 1991. It wasn’t bee disease or CCD that caused Canada’s colony collapse. It was a new law that stopped honey bee imports from the USA. Canadian bees that died during our long brutally cold winters couldn’t be cheaply replaced so about one-third of Canada’s beekeepers left the bee business. The mistake cost Canadian beekeepers millions of dollars and shows what happens when people who don’t know much about beekeeping make the rules.

Canada has finally had a few good years, but I predict that colony counts will be down a little next year, this time because the wholesale price of honey has fallen quite a lot. Some beekeepers will probably not replace all of their winter dead-outs. As a result, I think Canada’s colonies will number fewer than 700,000 in 2017.

Canada’s 2016 honey production is estimated as 92.2 million pounds. That’s a 123 pound per hive average. Respectable, but not Canada’s best – that  was 1998 when the national average was 180 pounds per colony. Few other places on Earth are as prolific, nor do they make the delicious snow-white honey that’s found in Canada.

Great Canadian honey – and lots of it!

Ron Miksha is a bee ecologist working at the University of Calgary. He is also a geophysicist and does a bit of science writing and blogging. Ron has worked as a radio broadcaster, a beekeeper, and Earth scientist. (Ask him about seismic waves.) He's based in Calgary, Alberta, Canada. Ron has written two books, dozens of magazine and journal articles, and complements his first book, Bad Beekeeping, with the blog at badbeekeepingblog.com. Ron wrote his most recent book, The Mountain Mystery, for everyone who has looked at a mountain and wondered what miracles of nature set it upon the landscape. For more about Ron, including some cool pictures taken when he was a teenager, please check Ron's site: miksha.com.
View all posts by Ron Miksha →
This entry was posted in Honey, Save the Bees and tagged Canadian honey, statistics. Bookmark the permalink.