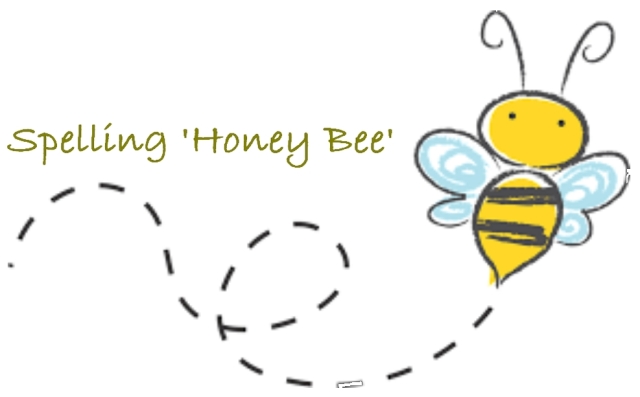 I’m not a grammarian, I don’t have the most hugest vocabulary, and I have been known to produce some pretty bad spells of whetther – but even I appreciate the right word, used and spelt correctly. Without rules, confusion reigns (and rains and rains).  I’m glad when someone points out errors I’ve made – it gives me a chance to learn.

I’m coming back to something I’ve written about before and then I’m moving on to something I’ve never written about.  Honey bee – it really should be two words, not one. I think the single word honeybee is just plain wrong. But I notice that some dictionaries disagree with me. Webster’s, for example.  Webster’s has also allowed yellow jacket instead of yellowjacket, which is just plain ridiculous. But then, Wikipedia also has an entry for ‘yellow jacket’ instead of yellowjacket, so maybe the whole world is coming to a spectacular illiterate end.

If you can’t trust Wikipedia or the dictionary, who can you trust? How about the ESA – the Entomological Society of America? They are the keepers of the bugs’ names and should be our final authority on this. They have adopted the ideas of Robert Evans Snodgrass (a bee anatomist!) for their rules on the common names for all insects.

In the etymology of entomology, R.E. Snodgrass makes sense. If it’s a bee that carries carpentry tools, it’s a carpenter bee. A wasp may wear a yellow jacket, but such a creature is called a yellowjacket (one word) according to the ESA. Finally, since our honey bee is a bee that makes honey, let’s give her that bit of credit and acknowledge her efforts: honey bee. Two words.

“We have such names as house fly, blow fly and robber fly contrasted with dragonfly, caddicefly and butterfly, because the latter are not flies, just as an aphislion is not a lion and a silverfish is not a fish. The honey bee is an insect and is preeminently a bee; ‘honeybee’ is equivalent to ‘Johnsmith.’”

So, don’t Johnsmith me. Go with the American bee expert and the Entomological Society of America instead of Webster (who also misspells colour, plough, and centre). Snodgrass and the ESA use honey bee (the type of bee slathered in honey) and not Honeybee (the name of Steam Powered Giraffe’s honeyed melody).

The Entomological Society of America calls honey bee and silverfish “common names”. There are a million bugs, but in English, only a couple thousand have common names. To name all the ones lacking common names, we use uncommon names – official latinesque scientific nomenclatures. 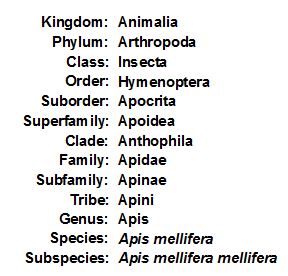 Working up the ranks, from subspecies (mellifera) to species (mellifera) to genus (Apis), we reach the family (Apidae) which again means bee. So, in the case of Europe’s original ‘black bee’, we have the scientific name Apidae Apis mellifera mellifera, which means ‘bee bee honeycarrier honeycarrier’. It’s probably best not to give taxonomists a lot of credit for imagination. Apidae, by the way, lumps honey bees together with bumble bees, stingless bees, carpenter bees, orchid bees and a few others.

Overseeing the family of Apidae, there are the clade and superfamily of bees which account for all of the known 20,000 or more bee species in the world. Above this is the suborder Apocrita containing bees, wasps, and ants which in turn are all part of the Hymenoptera (‘membrane-winged’) order. Hymenoptera are among the million plus Insectas which are spineless Anthropoda. They are members of the kingdom Animalia, which means that they are animals and not rocks, paper, or scissors.

So we have it, the old world black honey bee that you may still find skepped in isolated parts of northern Europe is properly identified as Animalia Anthropoda Insecta Hymenoptera Apocrita Apidae Apis mellifera mellifera. If you say “honey bee” I’ll know what you mean. But if you write “honeybee” I’ll know that you haven’t been properly schooled about our favourite animal.

Ron Miksha is a bee ecologist working at the University of Calgary. He is also a geophysicist and does a bit of science writing and blogging. Ron has worked as a radio broadcaster, a beekeeper, and Earth scientist. (Ask him about seismic waves.) He's based in Calgary, Alberta, Canada. Ron has written two books, dozens of magazine and journal articles, and complements his first book, Bad Beekeeping, with the blog at badbeekeepingblog.com. Ron wrote his most recent book, The Mountain Mystery, for everyone who has looked at a mountain and wondered what miracles of nature set it upon the landscape. For more about Ron, including some cool pictures taken when he was a teenager, please check Ron's site: miksha.com.
View all posts by Ron Miksha →
This entry was posted in Bee Biology, Culture, or lack thereof and tagged Apis mellifera mellifera, Entomological Society of America, honey bees, vocabulary. Bookmark the permalink.