Most nectar-supping insects land on a flower, take a bit of nectar, then fly off. But bees are different. They hang around the flower, sometimes gorging for ten seconds or more, if there’s enough nectar. Why the difference? Scientists think they have found the glue that keeps a bee stuck to a flower.

Insects (and people, too) are rewarded by their brains for discovering and devouring sugar. There’s a neuron for that – a biological wire that connects tongue and brain and shouts “Joy!”when sweetness hits the palate.

Humans experience satiation when we (for example) start munching a box of chocolates. The first chocolate is great, but by the time we finish all 24 in the box, we’ve had it. Our stomach might be able to hold another package or two, but our tongue and brain are hopefully telling us that we’ve had enough. However, if you were a social bee, you’d want to completely fill your honey tummy because you’re not just eating for yourself – it’s your duty to tank up with as much sweet stuff as you can hold and then pilot your blimp-body back to the hive.  [A honey bee weighs 90 mg (0.0002 lb) but her stomach can hold about 50 mg of nectar – that’s like a 200-pound person eating 110 pounds of chocolates.]

The point is, the bee has to keep loading up on nectar long after the delight is gone. With most other insects, that delight lasts a second or two. But a bee’s neurology has evolved to keep the bee eating. To do this, a neat trick is played on the bee’s taste sensors. First, she notices the sweetness. This attracts her to flowers with a high proportion of sugar (sucrose, fructose, glucose, and maltose) and makes her take that first big gulp. This is in response to a neuron 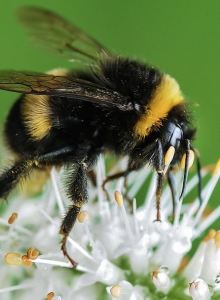 (similar to our own) that says “Sweet”.  But then, a second neuron switches on and overrides the pleasure neuron. The second is an inhibitor neuron which quickly shuts itself off, allowing the first neuron  to take control again, giving the bee the taste of sweetness all over again, as if it were the first time she has tasted that flower’s nectar. The intermittent (burst) firing of the second neuron prevents the bee from experiencing sweetness satiation (adaptation). This research is captured in a paper called “Burst firing in bee gustatory neurons prevents adaptation” recently published in Current Biology. The researchers worked with bumblebees but I suspect that the system is similar in honey bees.

Ron Miksha is a bee ecologist working at the University of Calgary. He is also a geophysicist and does a bit of science writing and blogging. Ron has worked as a radio broadcaster, a beekeeper, and Earth scientist. (Ask him about seismic waves.) He's based in Calgary, Alberta, Canada.
View all posts by Ron Miksha →
This entry was posted in Bee Biology, Science and tagged bumblebees, nectar, neurons. Bookmark the permalink.

10 Responses to Prolonging the sweet taste