See You in Court 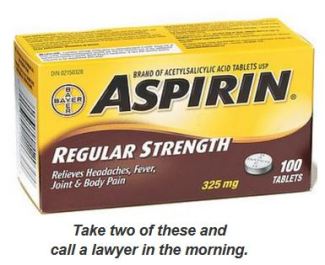 A few hours ago, Bayer and Syngenta were hit with a $450 million lawsuit for producing a pesticide which has allegedly hurt beekeepers’ businesses. This might be the largest claim ever filed in the history of beekeeping. Two Ontario honey-producing outfits – Sun Parlor Honey Ltd and Munro Honey started the nearly half-billion-dollar class-action lawsuit against the neonicotinoid manufacturers. I had never heard of either Sun Parlor or Munro, so I checked their websites.

As of this morning when I looked, I didn’t notice anything on Munro’s website that indicates their beekeeping activity (maybe I missed seeing that), but Sun Parlor’s website (September 4, 2014) says that “This year their 1,600 hives . . . will produce more than 300,000 pounds of award winning Ontario honey” – a very respectable 187 pounds per hive. Since Ontario’s long-term historic average is only around 100 pounds, that tells me that Sun Parlor’s beekeepers are exceptionally good. Congratulations to them for achieving something that most beekeepers are finding very challenging!

Despite Sun Parlor Honey’s self-reported anticipated bumper honey crop, Ontario beekeepers have generally been suffering. Last winter, losses were reportedly 58%, according to Better Farming‘s article “Cold weather blamed for high bee hive losses in Ontario”. Some Ontario beekeepers are directing blame towards pesticides. But others point out that viruses, destructive varroa mites, nosema, monoculture farming practices, a harsh winter, and bad beekeeping are among the causes of Ontario’s beekeeping woes.

They also point out that Alberta – Canada’s most productive honey province – is saturated in neonicotinoids, but has not seen the devastating losses experienced by Ontario’s beekeepers. In fact, southern Alberta’s canola-growing zone saw only 15% winter kill last year. In Alberta, neonics are used on the province’s most prolific honey source, canola. In Ontario, neonicotinoids are mostly used on corn which doesn’t secrete nectar and does not attract bees as seductively as canola does. The difference between Alberta and Ontario has been difficult to understand. Neonics are, of course, insecticides and they kill bees. If bees are fed toxic levels of neonicotinoids, it has been, well, toxic. But the levels fed in such cruel experiments have been greater than the amounts bees normally encounter. Perhaps Alberta will yet see huge losses of bees, but neonics have been used in the west for nearly ten years and Alberta has yet to see the dramatic problems encountered in Ontario.

Will the beekeepers win their lawsuit? The rebel in me wants to say “Yes!” But here in Canada, litigation is extremely expensive, extremely time-consuming, and is very much fact-driven. The Statement of Claim was filed in Ontario’s Superior Court. I have read its 30 pages, and you can, too – it is at this link. (I will comment on the Statement of Claim in a future blog entry.) The claim was filed on Tuesday asking for $289 million dollars, but was amended the next day, now seeking $400 million dollars for general and specific damages plus another $50 million dollars in punitive damages – or such other sum as the “Honourable Court finds appropriate.” The claim alleges that Syngenta AG and Bayer CropScience were “negligent” in the “design, sale, manufacture and distribution” of neonicotinoid pesticides. This may be true, but it will be difficult to prove. Lengthy discoveries will question the beekeepers’ management skills, sales receipts, expenses, and the pesticides generally used by beekeepers to fight varroa – and lots more. I don’t envy the beekeepers who will need to provide documentation and answer those questions. Eventually, years from now, there will be a trial. Considering the long battle ahead, these beekeepers are brave crusaders.

The courts may decide that the product is legal and safe except when misused. This would be a result similar to failed attempts to punish car and gun makers when their products are used irresponsibly. If beekeepers lose the case, it would probably be effective to issue claims against individual family farmers whenever they are deemed guilty of handling pesticides unsafely. On the other hand, it may turn out that neonicotinoids are viewed by the court as similar to tobacco and the makers may be forced to pay damages – especially if the manufacturers have not accurately portrayed their products, have not divulged all their studies’ results, or have otherwise misled users. If the product is found culpable by the courts, then corn farmers could be bankrupted by statements of claim for having used the nasty stuff. Either win or lose, I can see lots of future litigation directed at bean and corn farmers in Ontario – after all, they were the ones actually applying the poisons. But whatever the courts decide, it may take five years for a decision. And then there will be an appeal to the Supreme Court of Canada, with litigation lingering on for several more years.

Ron Miksha is a bee ecologist working at the University of Calgary. He is also a geophysicist and does a bit of science writing and blogging. Ron has worked as a radio broadcaster, a beekeeper, and Earth scientist. (Ask him about seismic waves.) He's based in Calgary, Alberta, Canada. Ron has written two books, dozens of magazine and journal articles, and complements his first book, Bad Beekeeping, with the blog at badbeekeepingblog.com. Ron wrote his most recent book, The Mountain Mystery, for everyone who has looked at a mountain and wondered what miracles of nature set it upon the landscape. For more about Ron, including some cool pictures taken when he was a teenager, please check Ron's site: miksha.com.
View all posts by Ron Miksha →
This entry was posted in Culture, or lack thereof, Pesticides, Save the Bees and tagged Bayer, colony collapse disorder, neonicotinoids. Bookmark the permalink.