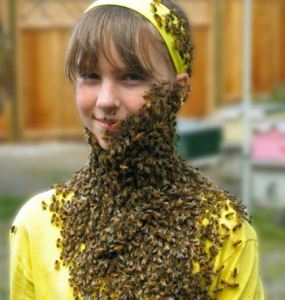 An itchy growth of facial bees

Almost anyone can grow a beard. Especially if honey bees are the nubs. The young lady in the picture to your right is showing off a sporty growth of facial bees. Surely there is some medicine or therapy that could have prevented this? A few days ago, the web master of a new beekeeping site (Beekeeping Planet) sent me a link to his site’s Top Ten Bee Beards page. So, it got me thinking about bee beards.

What is the fascination with bee beards? Not everyone likes the appearance of a shaggy face. (Although Darwin, Lincoln, Marx, and Castro all got good mileage from theirs.) And not everyone enjoys having small stinging creatures buzzing the cheeks. But combine the two, and you could make a documentary feature for PBS. I suppose that photos of bee-bearded folks are almost as old as photography. I guess it’s because the bee beard combines the yucky, the creepy-crawly, and the daring-do in a delectable way. Having a potentially dangerous motley crew of stinging creatures hanging under one’s nose has an almost universal appeal.

I started this blog entry with the idea that almost anyone can grow a bee beard. But then I was reminded of this tragic story about a 34-year-old gentleman in Vermont: Man Has Trouble Growing Full Beard Of Bees. It seems to be true – patchiness, uneven color, itchiness, and the odd stray gray bee seem to plague the young man whose father “always had a full thick beard of bees his whole life.” There is a solution, which The Onion news story didn’t report: some young men have been going for the full bee jacket to take attention off the lack of bee beard. It is easier to maintain and has just as much “Wow Power” as the facial bees. However, the bee jacket is not recommended attire while motorcycling.

Ron Miksha is a bee ecologist working at the University of Calgary. He is also a geophysicist and does a bit of science writing and blogging. Ron has worked as a radio broadcaster, a beekeeper, and Earth scientist. (Ask him about seismic waves.) He's based in Calgary, Alberta, Canada.
View all posts by Ron Miksha →
This entry was posted in Culture, or lack thereof and tagged bee beards. Bookmark the permalink.

1 Response to Braving the Beards