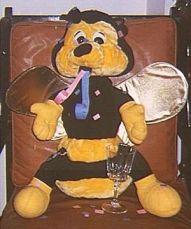 It’s been quite a year. A lot happened to beekeeping in 2015. Early in the year, honey prices soared to unprecedented levels, making beekeepers exceedingly wealthy. (Or maybe not.) Since mid-summer, however, the wholesale price of honey has fallen dramatically, impoverishing those same beekeepers.

Meanwhile, in science, a new idea about royal jelly emerged, completely overturning what we thought we knew about the magical stuff. During the past year or two, genetics was big, too, with a German researcher splicing a gene into the bee genome that makes bees glow in the dark. Late in the year, bees were spotted with rare black pollen – it turned out to be coffee grounds.  And, as has been the trend for twenty years, Saving the Bees continues to be the rallying call against GMOs, neonics, and multinational drug/chemical/seed cartels. Expect more of the same in 2016.

I know a little about bees, but certainly not everything. If you are looking for “How To…” beekeep pages, there are better websites than mine. My friend Allen Dick of Swalwell, Alberta, has been running one of the best of that sort for 20 years. Another great site (I like it so much that I donate) is produced by Randy Oliver. It’s mostly about bee diseases and sciency stuff, and is perfect for the intermediate to advanced beekeeper. There are, of course, a thousand other worthy sites to investigate as well.

As I said, this blog isn’t the best for everyday beekeeping stuff. Although I have worked with bees for over 40 years (and was a commercial beekeeper for 20), I really am one of the best examples of this adage: “Beekeeping is one of those things where the newbie feels like he knows everything. But as the years go by, he realizes that he knows less and less until eventually the bees show that the beekeeper doesn’t know anything at all.” Most days, that’s where I am.

What’s in my blog? For one thing, I’m big on learning from mistakes, having made so many myself. So, you will find some candid material that might show you epic fails to avoid. If you’re not keeping bees, you may still enjoy this blog because of my cynical tone, the warty growth of six decades of sardonic observations and musings. I am skeptical of everything, having seen all manner of promotions for better queens, better hives, and better beekeeping. I come down hard on these, especially when I smell hidden agendas and profiteering.

Here were the most popular Bad Beekeeping posts in 2015…

The most popular post for 2015 was Russian Plane Attacked by Bees. It’s not my best piece, but it was picked up by a big international news aggregator. I guess it was interesting to travelers and Russophiles. Maybe you liked it, too.

Number two in popularity was Mr Holmes’ Bees, my review of a gentle beekeeping movie about the Sherlock Holmes character.

I published Smoky Bees back in August when the American northwest forests were ablaze and Calgary bees were detained in their hives because of thick nauseating smoke. My piece looks at the old question of why bees gorge themselves with honey when they smell smoke, yet stay in their hives and burn when their hive catches fire.

Bees, the World’s Pollinators, was one of several book reviews I wrote over the past year. The book is a lovely photo essay about the various types of bees found around the world. In a cameo appearance, honey bees are given a two-page spread.

My fifth-most-popular blog post for 2015 was a look at “the forgotten disease” American foulbrood. AFB is ravaging beekeeping in South Africa. In other parts of the world, it’s mutating and becoming resistant to antibiotics. I remind people of this in Foulbrood: Still Smelling Foul.

Thanks for reading my blogsite about our most precious resource, our honey bees. (Kids are a close second.) I hope you have a great new year. I’m sure that 2016 will have even more entertaining bee stories. I’ll do my best to make you aware of them.

Ron Miksha is a bee ecologist working at the University of Calgary. He is also a geophysicist and does a bit of science writing and blogging. Ron has worked as a radio broadcaster, a beekeeper, and Earth scientist. (Ask him about seismic waves.) He's based in Calgary, Alberta, Canada.
View all posts by Ron Miksha →
This entry was posted in Culture, or lack thereof, Outreach and tagged The Year in Review. Bookmark the permalink.