This blog post is out of sync (“Tuesday” is being posted on Saturday), but as a good friend once told me, “It’s always Tuesday somewhere.” Truth is, it gets hard to post on a blog while on a conference. I’m behind.

On Tuesday at Apimondia, I arose early and headed up to the big conference centre. I was staying about 2 kilometres from the venue in downtown Montreal, but I’d been told to arrive before 8:30 on Tuesday to put up a poster that Dr Lawrence Harder and I produced about urban beekeeper socio-economic demographics.

I was surprised that our poster was given the best spot out of the posters that were up on Tuesday – it was number one in line, next to the doors that led into conference talks.  I’ll write in detail about our poster later, but for now, I’ll say that the subject was “Who becomes an urban beekeeper?” We used considerable math and data to come to a summary. We looked at neighbourhoods across Calgary and compared the number of apiaries in each neighbourhood to each community’s demographics (age, education, unemployment, home value, hospital visits, immigration, tendency to change houses, etc, etc). This helped us figure out if urban beekeepers are mostly old or young; rich or poor; and so on. When I find some time, I’ll write up the results and methodology here on this blog. Meanwhile, here’s the poster, which I’m posting on this post:

Hey, that’s me, on the left, with my poster on urban beekeepers. The young man is Matthew Polinsky, who also entered a poster at Apimondia (see below). Matthew’s grandfather was Derek Alen, a kind and extraordinarily talented Saskatchewan beekeeper who helped me out considerably when I was about Matthew’s age.

Matthew Polinsky researched an interesting topic: “Beekeeping in Canada: Trends of self-sufficiency and participation in the global honey bee trade”. In other words, how is Canada coping at raising it’s own queens and bees instead of importing them in the spring from warmer countries? That was a politically hot potato back when I was in my twenties and raising queens in Florida to boost my Saskatchewan hives. In those days, I used Canadian mother stock to produce queens in the south. It went well for me until the government disallowed the importation of USA bees. Nearly bankrupted me (and it did bankrupt some Canadian beekeepers). Border closure was supposed to keep mites out, but they soon showed up anyway. Closing the border caused the huge drop in beekeeping success in the graph on Matthew’s poster, below, where the bee population, honey production, and pollination services crashed in 1987 and didn’t recover for about thirty years.

Matthew found that empowering self-sufficiency and enhancing bio-security have had some long-term benefits. Today, many Canadians raise their own queens, winter losses are only around 25%, and the number of managed honey bee hives has recovered since ’87 and recently passed to even higher numbers. Only a bit over half of the queens heading Canadian colonies are now bred abroad (mostly in New Zealand, Chile, and Hawaii) while just over a hundred-thousand packages are imported from the south Pacific, which is down from before the border was closed and the bees came from our continent. It will be interesting to see how this goes over the next thirty years. Matthew’s email is on his poster and you can see the poster in better resolution at this link. It’s a nice study, though I don’t agree with all the conclusions.

Poster topics were amazingly diverse. Among the rush of time and the squeeze of people, I only read about ten posters, but I photographed twice as many for reading later. Some were highly technical, others, not so much. There was considerable artistic license on display. Including the hand-drawn montage, below. 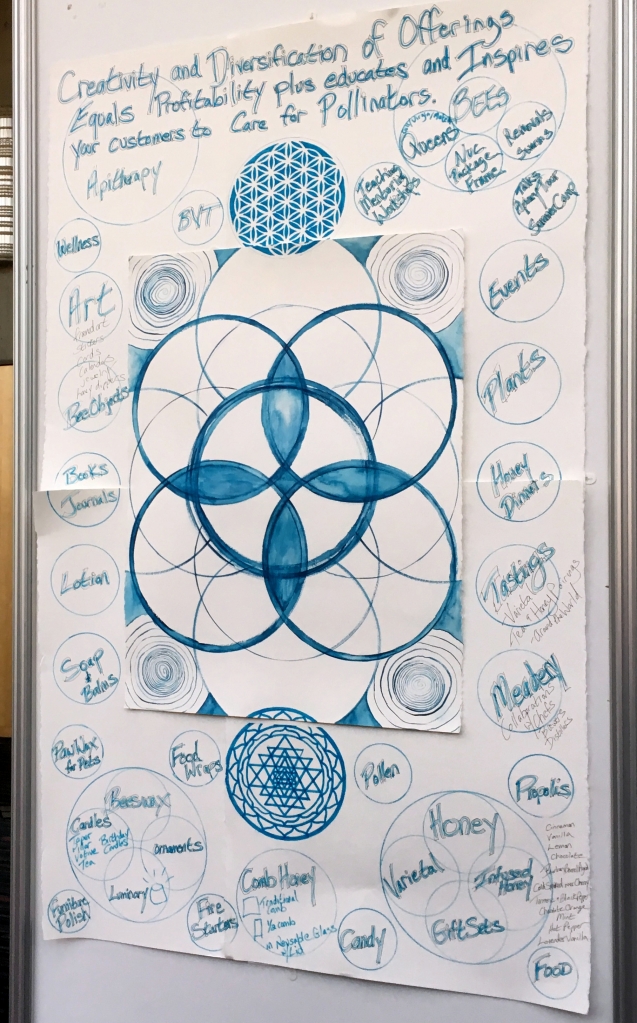 I have a story to tell about this poster. During the conference, a friend told me that he had considered doing a poster but was a little intimidated. I said, “Don’t be. Anything you do will look better than one that is up right now. Come on, I’ll show you.” So, I led him to the poster you see above. I began to encourage my friend, “See, you just need to glue together some paper and drawn something.” I continued like this until the author called out from a bench behind us. “Hey! That’s mine!” So, I explained to her, without apologizing, that she had submitted something which my friend could easily surpass. She laughed and said that I made her day – and my remarks confirmed that it was worth it for her to have entered her poster. Her poster’s point, which I obviously missed, is that “Creativity and Diversification…Inspires” as her title says. I guess it really does.

Before moving on to the more scientific posters, here’s another one that I found unusual. I checked their website, anarchyapiaries.org, to learn more, but remained just as mystified. Guess I’m getting old. On the website, I discovered these words, “Working with Bees is all about overcoming fear. The Hive is love incarnate. The Hive is the window to our new world. It takes patience and emotional energy to dismantle power dynamics Ð more awkward than a newborn goat.”   OK. Moving on. 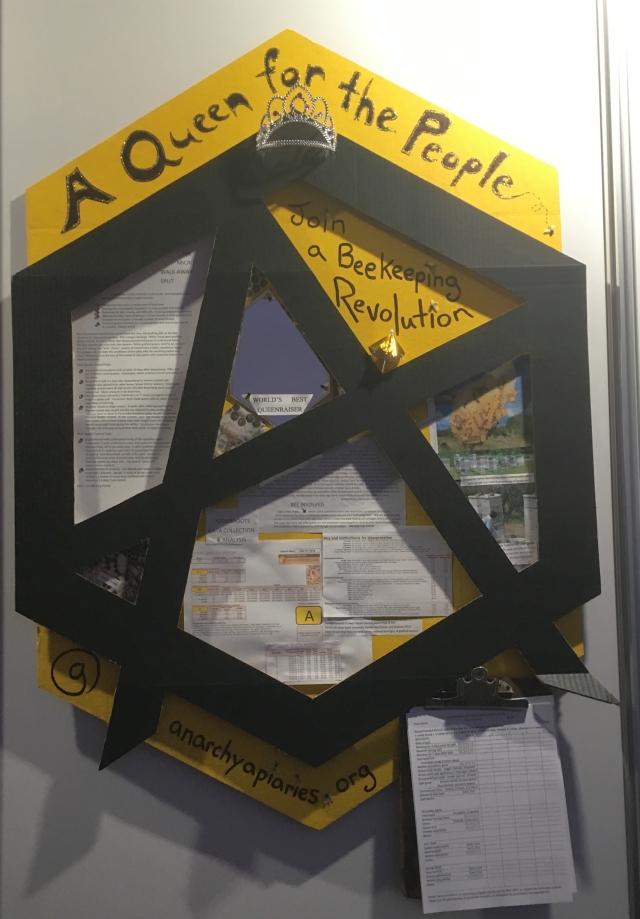 My friend, professor and podcaster Andony Melathopoulos, with Matthew Bucy, entered this poster. It looks a bit unusual. As Andony explained, he hadn’t read the poster entry requirements carefully and made the poster wide rather than tall. Some careful pruning and taping made it fit into its assigned spot. I think that Andony planned this all along, getting funky to draw attention to the message: labels might be wrong on those cans of poisons. This is a big deal. In the USA, they say that “The label is the law.” but what happens when the label doesn’t correctly align with FDA recommendations?

Now, less comment from me and more posters. These are just two percent of the 566 posters which were on display over the four days!

This poster introduces an AI-powered phone app from Bee Health Guru. It shows how the app can monitor and follow the spread of bee health problems. The poster was posted by respected semi-retired professor Malcolm Sanford, whom I have been following online for years. I had a nice chat with Malcolm and was glad to see that his talents are being fully engaged in the bee world. 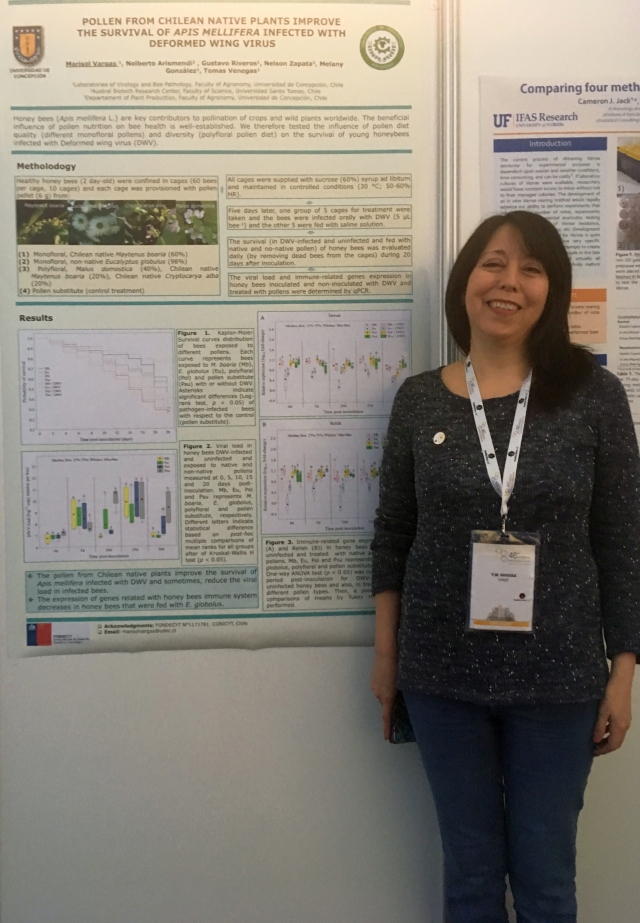 Chatting with this presenter helped me understand the key role of nutrition in combating bee viruses.

Michael Palmer traced his background in bees and the importance of good queen rearing.

That’s all I’ll post. This was intended to give you a taste of the incredible breadth of bee research being conducted. Someone at the conference told me that more papers on bee-related subjects have been published in the past ten years than in all the preceding years. I don’t know if that’s true, but every new study shows us that there is still much, much more for us to learn.

Ron Miksha is a bee ecologist working at the University of Calgary. He is also a geophysicist and does a bit of science writing and blogging. Ron has worked as a radio broadcaster, a beekeeper, and Earth scientist. (Ask him about seismic waves.) He's based in Calgary, Alberta, Canada.
View all posts by Ron Miksha →
This entry was posted in Beekeeping, Friends, Science and tagged Apimondia, Montreal, posters. Bookmark the permalink.