Apimondia 2019: Wednesday (And a scandal)

Wednesday at Apimondia was a more relaxed day for me. I ran into several more friends, looked around the city of Montreal, sat at several talks, viewed more posters, tasted more honey in the exhibition hall, and shared an afternoon meal with a group of friendly Scottish beekeepers. They were friendly after they checked which clan I represented. (No problem on that one, considering my central-European roots!)

Wednesday was also the day that I heard about the big scandal. OK, not really a ‘scandal’ – I used that word to get you to read this piece. ‘Disturbance in the fabric of the universe’ may be a more fitting expression. An important part of Apimondia is the World Beekeeping Awards program. Gadgets, books, and honey are judged and awarded appropriately. (At the 2005 Ireland Apimondia, my bee website and blog won Silver. I cherish the medallion they gave me.)

Unfortunately, the honey competition didn’t go sweetly this year. Last month, the honey entries were sent to labs for adulteration and contamination testing. Forty percent of honey entries failed the tests. I don’t know which tests were conducted or by whom, but this was major bad news for the honey industry and for the competitors. If the best beekeepers in the world can’t produce perfect honey, who can?

Perhaps the tests were conducted at one part per trillion, with zero tolerance for herbicides, pesticides, or other materials. If zero-tolerance was the limit, then I’m not surprised. Zero tolerance would keep us from eating much of anything. But there were a lot of angry voices coming from the judged entry displays where irate contestants bludgeoned the innocent volunteers who guarded the stations. Not a pretty image. 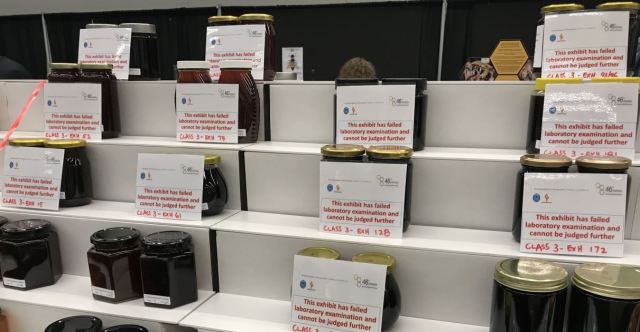 Out of these 15 entries, 12 ‘failed laboratory examination’.
Overall, 40% of the honey competition entries were rejected.

Darker honey suffered the most rejections, which surprised me. I usually thing of the dark stuff as more wholesome – sometimes it originates in organic apiaries. I found this incident stunning and I worry about future competitions. Yes, honey has to be pure. But I wonder about the way it was tested, the contamination sources, and the level of tolerance.

I don’t have much information. At this point, the story is in the rumour stage with questions floating around about methodology. From the Bee-L Listserver, there is a report that one contestant filled two entries from the same vat and received two  disqualifications for two different reasons. If I learn more, I’ll post more.

Ron Miksha is a bee ecologist working at the University of Calgary. He is also a geophysicist and does a bit of science writing and blogging. Ron has worked as a radio broadcaster, a beekeeper, and Earth scientist. (Ask him about seismic waves.) He's based in Calgary, Alberta, Canada. Ron has written two books, dozens of magazine and journal articles, and complements his first book, Bad Beekeeping, with the blog at badbeekeepingblog.com. Ron wrote his most recent book, The Mountain Mystery, for everyone who has looked at a mountain and wondered what miracles of nature set it upon the landscape. For more about Ron, including some cool pictures taken when he was a teenager, please check Ron's site: miksha.com.
View all posts by Ron Miksha →
This entry was posted in Honey, Science, Strange, Odd Stuff and tagged adulteration, Apimondia, honey judging. Bookmark the permalink.

8 Responses to Apimondia 2019: Wednesday (And a scandal)