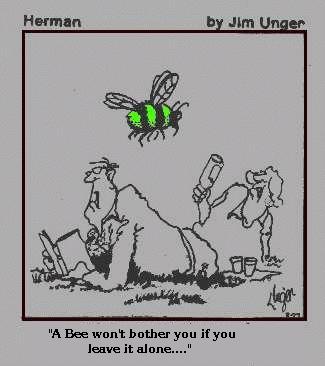 Our thanks to the late, and great, Canadian cartoonist, Jim Unger

Well, the bees are getting a bad rap in Britain. Here’s a headline from a Herald Sun newspaper this month that shouts, “BEE stings kill as many people in the UK as terrorist attacks do”. We don’t doubt the veracity of this story because the article’s subtitle headline adds, “a government watchdog report claimed today.” Government watchdogs?  Dobermans or Rat-Terriers engaged in the bee-sting body count business? I’m not surprised. Actually, the government watchdog is David Anderson, aka the Independent Reviewer of Terrorism Legislation. His official report lumps wasps, hornets, and a hundred species of bees into the group responsible for five “bee” sting deaths in 2010 – in all of the United Kingdom (home to 63 million people). Five unfortunate fatalities – some municipalities would ban bees on the basis of this perceived excessive danger. But baths are even more deadly, hence many Brits have banned bathtubs and showers from their homes already, best I can judge from several trips on the London tube* – Bathroom dangers were the source of 29 deaths in 2010.

(* Just kidding about the Brits on the subway! In a recent survey of Europeans, the Brits place ahead of the French in baths per week.)

British bathtubs are six times more dangerous than bumbling bees and their wasp-ish cousins. Over the past two years, no Brit was killed by a terrorist.  Zero. So, the hundreds of millions spent on watching terrorists may be over-kill, so to speak, according David Anderson, the government-paid watchdog who will probably be losing his job soon. But maybe spending those millions prevented attacks by fundamentalist loonies of all stripes and saved four or five deaths each year. We will never know. It should be noted, says the article, that the Director General of MI-5 (whose funding would be reduced if Britain’s conservative government took this report seriously) is pleading quite the contrary to the watchdog report. Claiming instead that “at least 200 known Britons were currently receiving terrorist training at militant camps in the Middle East.” Here in Canada, we can be grateful we have a Conservative government (elected by 39% of voters) who came into office on a platform of austerity and reduced spending. They are not likely to squander money on excessive terrorist-watching, mega-prisons, war planes, tributes to foreign royalty, or other nonsense. OK, maybe Canadian Conservatives are as likely to squander our money as conservatives everywhere are…

Finally, let me note that the difference between the dangers of bees and the dangers posed by terrorist fundamentalists are palpable. The terrorists are contributing nothing to society, are generally unremorseful (think of the smirking Anders Behring Breivik of Norway), and have the intention of murder. The bee has no evil intent. Unlike the fundamentalist, as everyone knows, a bee won’t bother you if you leave it alone.

Ron Miksha is a bee ecologist working at the University of Calgary. He is also a geophysicist and does a bit of science writing and blogging. Ron has worked as a radio broadcaster, a beekeeper, and Earth scientist. (Ask him about seismic waves.) He's based in Calgary, Alberta, Canada.
View all posts by Ron Miksha →
This entry was posted in Culture, or lack thereof, Humour, Stings, Strange, Odd Stuff and tagged bee stings. Bookmark the permalink.