Bumble Bees and Free Will

Bombus terrestris, under the radar.

Much is made of a human’s ability to make free choices. It’s an illusion, of course, but if people should be awarded this mysterious power, then why not bees? To bolster this notion of bees and free will, we’ll look at a series of maps created by researchers in the UK. Using radar, they monitored the flights of bumble bees (Bombus terrestris).

From the variety of foraging paths shown below, it appears that the bees exhibit unique personalities. Some forage close to home, some make multiple exploratory trips, some find a good foraging spot and persistently return to it. None of the bees behave the same. They each use different learning strategies during exploratory stages and differ in foraging style during exploitation. Does such variation imply that bees exercise free will? First the maps, then the free will. See if you can resist looking ahead, but your choice (study the map or go for the goal) is already predestined.

Here are the maps generated by Woodgate, Makinson, Lim, Reynolds, and Chittka in “Life-Long Radar Tracking of Bumblebees“. The blue dot is the nest location for all four of the observed bumble bees. Bee A engaged in 156 recorded flights, mostly close to the colony. Bee B seems to become less and less focused with each successive flight, scattering her attention across the fields, while Bee C and Bee D likewise display rather different foraging patterns: C makes few excursions while D going farthest, even beyond the researchers’ map. 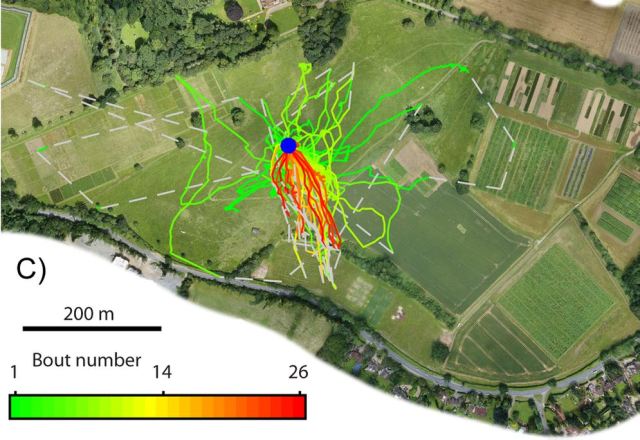 “Every flight ever made outside the nest by four foragers was recorded. . . We identified how each bee’s flights fit into two categories—which we named exploration and exploitation flights—examining the differences between the two types of flight and how their occurrence changed over the course of the bees’ foraging careers.

“Exploitation of learned resources takes place during efficient, straight trips, usually to a single foraging location, and is seldom combined with exploration of other areas. Exploration of the landscape typically occurs in the first few flights made by each bee, but our data show that further exploration flights can be made throughout the bee’s foraging career.

“Bees showed striking levels of variation in how they explored their environment, their fidelity to particular patches, ratio of exploration to exploitation, duration and frequency of their foraging bouts. One bee developed a straight route to a forage patch within four flights and followed this route exclusively for six days before abandoning it entirely for a closer location; this second location had not been visited since her first exploratory flight nine days prior. Another bee made only rare exploitation flights and continued to explore widely throughout its life; two other bees showed more frequent switches between exploration and exploitation.” – “Life-Long Radar Tracking of Bumblebees“

A bee’s free will

In 2012, Gene Robinson at the Carl R. Woese Institute for Genomic Biology in Illinois compared behaviour in honey bees as they scouted for new homes for their swarms and as they scouted for food. Robinson says that a test of behaviour where the same task (in this case, scouting) is performed under different conditions (scouting shelter vs scouting food) potentially reveals existence of personality. In the case of honey bees, about 5% are willing to perform ‘scouting’ tasks.  For either food or shelter, it tends to be the same 5% of the bees which are ‘scouts’.

Having determined that ‘personality’ differences exist in honey bees, the researchers set about studying the cause. Could bees simply be choosing (‘free will’) to be adventurous thrill-seeking scouts, or is that activity due to some neural chemical stimulus? The answer was tentatively discovered at the molecular level. Similar to humans and other vertebrates, hormones and proteins are linked to thrill-seeking. Glutamate,  catecholamine, glutamate, γ-aminobutyric acid, octapamine, and dopamine are among the chemicals which control whether a particular honey bee may be one of the 5% willing to seek a new home or a new patch of clover. The results of this research and the experiments conducted can be seen in “Molecular Determinants of Scouting Behavior in Honeybees”.

We are just beginning to unravel the decision-making process. All signs point to molecular biochemistry. The hapless bumble bee fumbling around the English countryside is simply a victim of a particular surge of proteins and hormones released into her tiny brain. She has no choice but to cooperate. Whether that results in wide-arcs of adventurous flower-seeking or careful and measured foraging is beyond the bee’s willful control.

Ron Miksha is a bee ecologist working at the University of Calgary. He is also a geophysicist and does a bit of science writing and blogging. Ron has worked as a radio broadcaster, a beekeeper, and Earth scientist. (Ask him about seismic waves.) He's based in Calgary, Alberta, Canada. Ron has written two books, dozens of magazine and journal articles, and complements his first book, Bad Beekeeping, with the blog at badbeekeepingblog.com. Ron wrote his most recent book, The Mountain Mystery, for everyone who has looked at a mountain and wondered what miracles of nature set it upon the landscape. For more about Ron, including some cool pictures taken when he was a teenager, please check Ron's site: miksha.com.
View all posts by Ron Miksha →
This entry was posted in Bee Biology, Ecology, Science and tagged bee foraging, bee scouts, Bombus terrestris, bumblebees, England. Bookmark the permalink.

5 Responses to Bumble Bees and Free Will