Let’s celebrate bees –  and enjoy a really cool art project at the same time! Matthew Willey, an energetic and talented artist, is highlighting beauty and nature with a series of gorgeous honey bee murals.  It’s an ambitious project. Willey’s plan is to personally paint 50,000 honey bees (the number typically found in a colony). There are 11 bees in the mural just above, so it would take over 4,000 similar paintings to reach that goal!

I asked Matt how long it will take to paint murals with 50,000 bees. He told me that he anticipates spending 15 to 20 years at this project. “But the idea is not to hurry and has nothing to do with time. I actually do not get tired of painting bees. Each mural is different and I keep challenging myself to take things to the next level with the work. It is freeing to have the subject matter be anchored in the bees and let the imagination go from there,” he said. 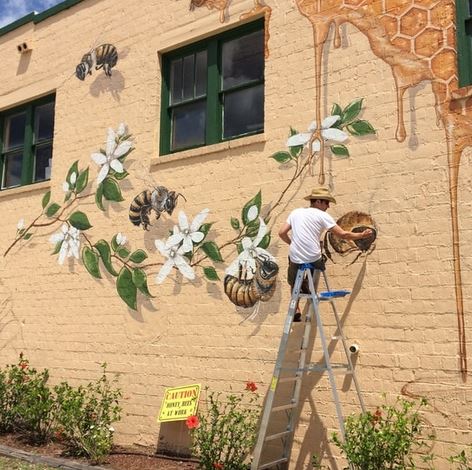 The murals (which you can view in detail at his The Good of the Hive webspace) are cropping up around the USA and eventually beyond. (Canada? “At some point without a doubt,” answered Matt). Today, you can find his murals from LaBelle, Florida (Curtis Honey Company) to Seattle, Washington (Broadstone Sky Building).

Several ambitious murals are in North Carolina – near Durham (at Burt’s Bees’ offices), Chapel Hill (Estes Hills Elementary School), Raleigh (NC Museum of Natural Sciences), Asheville (Foundation Skate Park), and Carrboro, where he worked in blistering heat to paint the town fire hall. I asked Matt about it: “The Carrboro mural was painted in excruciating heat, but I just imagined that the firefighters inside the building where I was painting work in REAL heat! And every time a little kid comes by and points at the big bees with excitement, my heart melts back into the work. Even with all of the issues that come with painting large, public outdoor murals, it really has been an incredibly joyful experience so far.”

Carrboro Fire Hall Photos © The Good of the Hive 2016

Matthew Willey’s The Good of the Hive mural project is just starting its second year. His team will be launching a crowd funding effort in a few weeks and I’ll remind you when it happens. I’d like to contribute a little to this effort and hope you will, too. We’ll have more of Matt’s art on this blog when we visit him again in March.

Ron Miksha is a bee ecologist working at the University of Calgary. He is also a geophysicist and does a bit of science writing and blogging. Ron has worked as a radio broadcaster, a beekeeper, and Earth scientist. (Ask him about seismic waves.) He's based in Calgary, Alberta, Canada. Ron has written two books, dozens of magazine and journal articles, and complements his first book, Bad Beekeeping, with the blog at badbeekeepingblog.com. Ron wrote his most recent book, The Mountain Mystery, for everyone who has looked at a mountain and wondered what miracles of nature set it upon the landscape. For more about Ron, including some cool pictures taken when he was a teenager, please check Ron's site: miksha.com.
View all posts by Ron Miksha →
This entry was posted in Culture, or lack thereof, Outreach and tagged bee art, Carrboro, Matthew Willey, North Carolina, The Good of the Hive. Bookmark the permalink.

4 Responses to Painting the Bees