Brood in Front of the Hive?!?

Everyone has a question…

I’m continuing with the series of questions which I overheard at a bee meeting a few days ago. Today, it’s dead brood.

Here are those questions:

Why is there dead brood in front of my hive? This is hard to answer without samples, a photo, or a trip to the beekeeper’s apiary. But anytime there’s a suspicious bee death, we should pay attention.

More winter-dead bees than you want.

Usually, of course, dead bees in front of a hive are adult bees. The most common ‘natural’ cause (at least here in Canada) is cold. Bees may fly out on sunny winter days (to use the outdoor plumbing) but then get chilled and drop in the snow before they get back into the hive. A few dozen such casualties is completely normal, but hundreds of bees lying in the snow may mean some sort of trouble.

Fog can play the same nasty trick on the bees. Years ago, my father worked for Al Wynn, a California queen breeder. Along the coast near Napa Valley, according to my father, they would occasionally lose bees when heavy fog drifted inland. The beekeepers found chilled damp bees near the hive entrances and queen mating was poor for that round.

At almost any time of year, skunks might bother hives here in western Canada, and around much of North America, I suppose. Mephitidae scratch beehive entrances at night, inviting bees to come out and see what’s making all the commotion. Then the skunk laps up bees like a kitten with milk. The next day, the beekeeper finds hundreds of desiccated adult honey bee bodies in scat or spat piles near the hives.

Another big cause of lifeless adult bees in front of hives is poisoning. These days this isn’t too common up here in western Canada. But a generation ago, aerial spray to combat pests on canola and alfalfa led to honey bee deaths by the millions. Today, farmers are more aware of the need to keep honey bees and other creatures alive and healthy. Farmers have changed some of their bad habits and they’ve switched to pesticides that don’t blanket the entire field (and nearby apiaries) in poison. It’s been a while since I’ve heard of bee kill here on the prairies, but we know that insecticides are still used around honey bees – most recently the disaster in South Carolina where the county used bombers to attack mosquitoes. That resulted in millions of inadvertent honey bee deaths.

Those (pesticide, skunk, weather) bee massacres result in mounds of adult bees in front of hives. It’s all too common. But it’s rare to find dead brood in the grass. Obviously, the brood must be carried out of the hive by adults because bee brood is immobile. (It would be pretty creepy if you opened a hive and found your bee larvae crawling around.) Honey bees like to keep things tidy, so they drag out anything that seems out-of-place. That includes bits of paper that wrapped your pollen patties or united your colonies as well as dead brood. 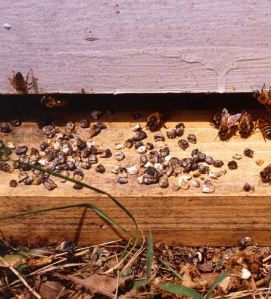 If the larvae died from foulbrood, it’s unlikely you’ll see it in the hive’s front yard. Such stuff deteriorates quickly into a smelly mess, then hardens and sticks in the cells. However, if the brood is chalk (or ‘stone’) brood, you may find masses in front of the hive and on the landing board. Chalkbrood stays together is a tidy clump that the bees pull out of the cells. Usually it falls to the bottom board after the bees excavate it. Often workers drag it from the bottom board, or directly from the cells, and deposit the chalk mummies in the grass. Serious cases of chalkboard reduce a hive’s population by ten percent or more, but I’ve never heard of it being fatal. Hygienic bees clean it up more quickly, so you can sometimes reduce chalk by replacing the queen. Moving the hive to higher, less mould-inducing turf also helps.

I couldn’t answer the question about why dead brood was in front of the hive because there is another possibility. Without a clear description of the dead brood, I couldn’t know if it had died from chalk or from mite infestation. Both relate to bees’ hygienic behaviour – honey bees remove sick or dead brood, reducing the chances of disease spreading within the hive. If the dead brood in the grass is plump larvae and not chalky gray/white mummies, then it could be brood that was accidentally killed during your last hive visit, or more likely, it’s brood that was infested by mites and then flown out of the nest by house-cleaner bees.

So, once again, I have failed to answer the question, except to say “It depends…” on factors that I wouldn’t know unless I visited the apiary myself. And even then, I might be wrong.

Ron Miksha is a bee ecologist working at the University of Calgary. He is also a geophysicist and does a bit of science writing and blogging. Ron has worked as a radio broadcaster, a beekeeper, and Earth scientist. (Ask him about seismic waves.) He's based in Calgary, Alberta, Canada. Ron has written two books, dozens of magazine and journal articles, and complements his first book, Bad Beekeeping, with the blog at badbeekeepingblog.com. Ron wrote his most recent book, The Mountain Mystery, for everyone who has looked at a mountain and wondered what miracles of nature set it upon the landscape. For more about Ron, including some cool pictures taken when he was a teenager, please check Ron's site: miksha.com.
View all posts by Ron Miksha →
This entry was posted in Bee Biology, Bee Yards, Beekeeping, Diseases and Pests, Pesticides, Strange, Odd Stuff and tagged American Foulbrood, chalkbrood, dead bees, skunks, wintering. Bookmark the permalink.

9 Responses to Brood in Front of the Hive?!?