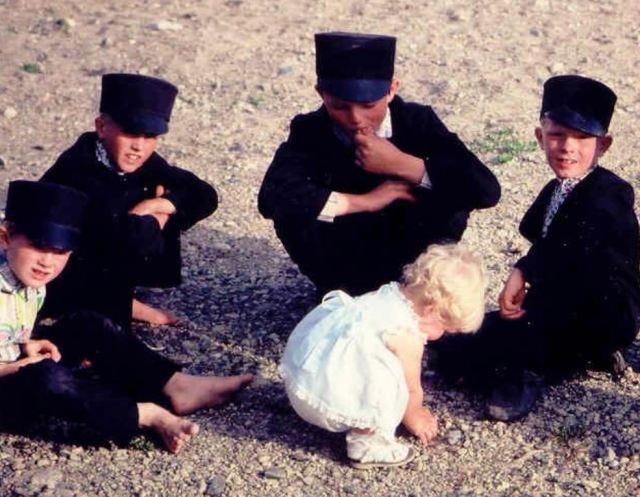 Hutterite kids, hanging out with my daughter. Not every moment is spent working.

A friend wanted to name his honey farm The Lazy Bee Apiaries. He even made the proper brand (LBA) for marking his frames and rims. But other beekeepers (including me) told him that bees aren’t lazy. Sometimes beekeepers are a bit work-averse, but never bees.  Was I right about that?

Bees have a reputation for tireless work. Their alleged ethics are borrowed by moralizers and preachers, including my friends, the Hutterites. They belong to a Mennonite-style religion started by Jacob Hutter five hundred years ago. Hutterites live communally on big farms, called colonies. Every generation, each farm ends up with too many kids for their sections of fertile farmland, so they send out a swarm of Hutterites to start another farm, which eventually splits again, after another generation. (From 400 immigrants in 1879, there are now 45,000 Hutterites in North America.) The Hutterites see parallels between themselves and the bee colony, swarms, and the bees’ extreme work ethic. These are traits which the Hutterites believe they share with honey bees.

But I don’t think bees work as hard as Hutterite farmers. In fact, I’ve come to suspect that bees can be a touch indolent. I’m not talking about drones, who are philosophically opposed to any form of labour. I’m talking about worker bees.

Mark and his hive. It looks like some of his bees aren’t working.

I fell into this train of thought when a neighbour here in Calgary invited me to take a peak at his bees. It’s Mark’s first year beekeeping. He’s doing well. His single hive, established in early May from a package, has grown from its initial single box. Now it fills four deep chambers and two shallow supers. Mark wanted my opinion on the bees’ strength, honey harvest, and winter prospects.

It wasn’t hard to tell him that his bees were doing fine. He had already harvested a super of honey, the bees had plenty of stores for winter, and the queen seemed active enough. There was no indication that they might swarm this year and their brood nest was not crowded. (You want the queen to have space in mid-August. If the brood nest is honey-bound, the queen stops laying and there aren’t enough bees for winter.) Everything was in good shape. We rearranged the order of the boxes and swapped around some foundation. Nothing dramatic.

As I mentioned, Mark is a new beekeeper. First year with bees. I like working with newbies as they often ask questions which I wouldn’t normally wonder about. For example, Mark pointed to two bees which were idle on a frame of sealed honey. They were just sitting there, perhaps chatting, but apparently doing nothing else.

“What are those bees doing?” Mark asked me.

I had no idea. How many times have I opened a hive, fumbled through some necessary manipulations, seen thousands of bees ‘hanging around’ but never stopped to wonder what a particular bee was doing at that particular moment.  I told Mark that I didn’t know. Maybe they were resting. Maybe they were disturbed by us, the beekeepers, and otherwise might have been gainfully employed. It looked like they were doing nothing.

If you quietly open any hive, give a gentle puff of smoke, and slowly remove a few frames, you’ll find hundreds of bees just hanging around. Not feeding hungry brood. Not drying and curing fresh nectar. Not constructing new comb. Not doing anything.

Are bees busy? Well, we’ve already dismissed drones as total miscreants. The queen, as we know, does a lot of work laying eggs, but she has a lot of down time, too. If you’ve ever watched her at her job (best viewed through an observation hive’s glass so she doesn’t get agitated), you’ll know that she spends less than ten seconds laying each egg. Count to ten, slowly. That’s enough time for the queen to drop an egg and move on, checking for the next cell.  A good queen may lay 2,000 eggs a day in a healthy developing hive, spending less than six hours each day working at her job. Then autumn and winter come and she has even less to do. This puts her productive hours only a little better than many office workers. 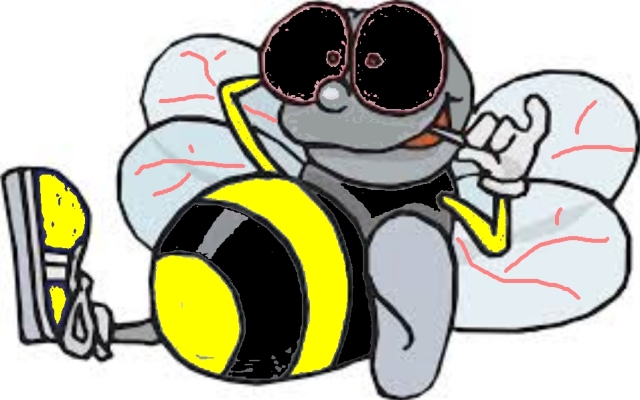 Worker bees seem to have it rather easy, too. Except during big nectar flows when a bee might forage non-stop fourteen hours a day for three or four weeks, finally retiring in death when her ragged wings shred from overuse, plunging her and her tiny droplet of freshly drawn nectar to the cold, unforgiving earth. Oh well, eh?

But that’s the romantic notion of a honey bee’s service. The vast majority never get to die for the team. In fact, the average bee’s life is mostly sedentary. Honey bees won’t fly if it’s cool (below about 10C/50F) or hot or windy, drizzly, or snowy. They don’t forage in the dark. If nectar-rich plants aren’t secreting, they don’t work even if the weather is good.

What about those two idle bees in Mark’s hive? They were too old to be housekeepers or nurses – and they were relaxing far from the brood. Other bees were gathering nectar (we side-shook a wet frame and thick nectar dribbled out). Those idle bees could have been at work, but weren’t. I guess even bees need some downtime. Hutterites, too. Whenever I would stop by at the nearest Hutterite colony, I could always find someone with a bit of time for a relaxing visit and small glass of dandelion wine – even on mild, sunny afternoons.

Ron Miksha is a bee ecologist working at the University of Calgary. He is also a geophysicist and does a bit of science writing and blogging. Ron has worked as a radio broadcaster, a beekeeper, and Earth scientist. (Ask him about seismic waves.) He's based in Calgary, Alberta, Canada. Ron has written two books, dozens of magazine and journal articles, and complements his first book, Bad Beekeeping, with the blog at badbeekeepingblog.com. Ron wrote his most recent book, The Mountain Mystery, for everyone who has looked at a mountain and wondered what miracles of nature set it upon the landscape. For more about Ron, including some cool pictures taken when he was a teenager, please check Ron's site: miksha.com.
View all posts by Ron Miksha →
This entry was posted in Bee Biology, Beekeeping, Friends and tagged beekeeping, Calgary, Hutterites. Bookmark the permalink.

16 Responses to The Lazy Bees