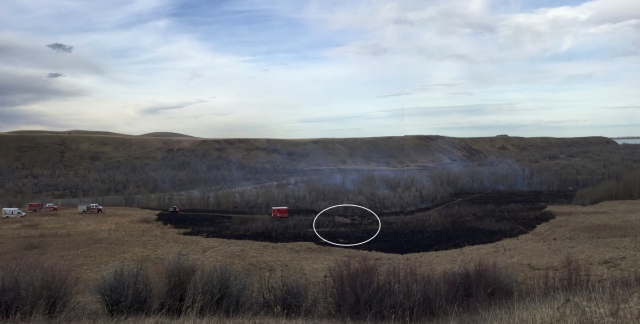 Southern Alberta: This grass fire apparently started at the bee yard, then spread out in all directions. Three fire departments responded. The fire didn’t spread beyond the beekeeper’s property.

Today, I will end this mini-series of blog posts about smokers with some safety tips. Smokers can be dangerous and yada, yada, yada – some readers have already tuned out. But here’s the cost.  I know a South Dakota beekeeper who had to pay $250,000 when his bee crew’s smoker burned down a rancher’s winter hay. Meanwhile, a friend in southern Alberta was luckier when her smoker caused a 3-alarm grass fire (above and below). She was lucky because the firemen kept it confined to her own field.

I also had an apiary fire, likely caused by a bee smoker. In southern Saskatchewan, my helpers and I had just returned to the shop when a rancher called to tell us that there was a fire in the bee yard we had worked fifteen minutes earlier. We raced back and put it out. The fire hadn’t gone far as it was trapped between a summer-fallowed field (all dirt) and a paved road. It’s possible that someone tossed a cigarette as they drove past on the highway, but since we’d just been there, I figured we had caused the fire from sparks while smoking hives. We drove away without noticing the small fire. When we got back, four hives (out of thirty) had burned. So, yada, yada, yada, indeed.

You know that a combination of hot embers, dry grass, flammable wax, and wooden bee ware is dangerous. Here are some safety tips. Let me know if you have anything to add:

Light the smoker out of the wind, sheltering it so fire doesn’t escape. Some beekeepers light material in their hands, then push it into the smoker pot. That’s risky as the fire may escape. I always drop a burning match low into the smoker where it will light the material above it. I like to be in control.

Never dump ashes from a hot smoker in the bee yard. I’ve seen beekeepers do this just before driving off. They stomp the ashes into the ground first, of course, but that’s sometimes not enough to kill all the embers.  Instead, plug the smoke spout to stop its draft and set the smoker on its side, taking it with you while it’s still hot.

Watch out for sparks. If you keep bees in a dry climate area, grass and brush may catch fire really easily. If you ever use a smoker at night, you might be surprised to see how many sparks and embers come out of a smoker. You might not see them during the day, but they could be there. Sparks almost never cause trouble, but it only takes one to ruin your day.  Sparks usually happen if the smoker is too hot. To reduce flying sparks, add fuel to the smoker and tamp it down to filter the sparks.

If you use wood shavings, avoid sawdust and avoid tipping the smoker down into the hive where hot wood chips could fall out. Use paper or burlap atop the wood to prevent shavings from falling and to filter sparks.

You can control the smoker by standing it upright to create a draft, which keeps it burning more strongly, or laying the smoker on its side which reduces the draft and throttles the smoke. If it’s on its side for a long time, it will eventually go out but usually if its just for a few minutes, simply pump the bellows a few times, pointing the spout towards the sky and you will revive the smoker.

When you set the smoker aside between uses in the bee yard, don’t drop it (the lid might open and hot fuel could dump out) and don’t set it on the grass where a fire might start.

Smoke judiciously. You need only a small amount of smoke to control defensive bees. If you think you need lots, you are probably doing something wrong. (Moving too quickly, knocking equipment around, not showering often enough.)  As one noted beekeeper said, “you will end up breathing quit a bit of smoke.” That can’t be good for you or the bees.

As far as setting the smoker aside but keeping it handy for future use, you might place it inside a metal smoker box. Twenty years ago, I was gifted a metal tool box sold by Canadian Tire (a tools and and tires store). The box  has served me well. It’s exactly the right size to hold the smoker on its side (so there is no upward draft to cause flame). Fire can’t escape. The box won’t burn. I also use a wine bottle’s cork to seal the smoker when I’m finished for the day before putting the smoker into the metal box. I’ll end here with a few pictures of my smoker box. 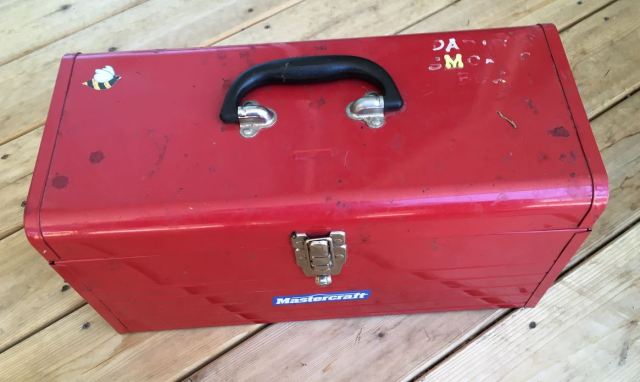 Metal box, available at most general tools and supply shops. 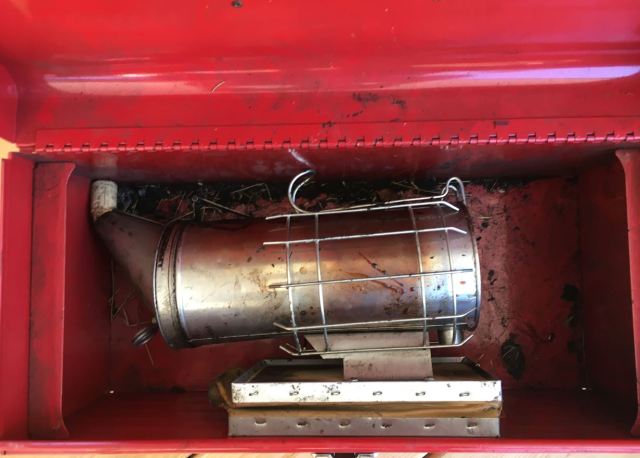 Pick a size that holds your smoker with the bellows immobile.

I use a cork to prevent draft but many beekeepers use a wad of green grass. 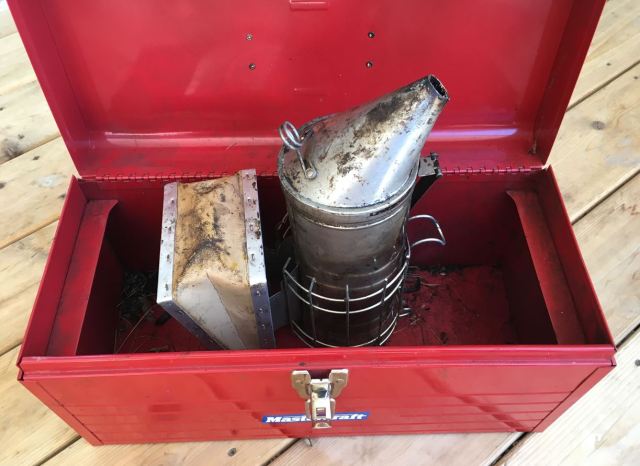 For extra safety, you can light the smoker inside the metal box.

Ron Miksha is a bee ecologist working at the University of Calgary. He is also a geophysicist and does a bit of science writing and blogging. Ron has worked as a radio broadcaster, a beekeeper, and Earth scientist. (Ask him about seismic waves.) He's based in Calgary, Alberta, Canada.
View all posts by Ron Miksha →
This entry was posted in Beekeeping, Tools and Gadgets and tagged Alberta, bee safety, bee smoker, fires. Bookmark the permalink.